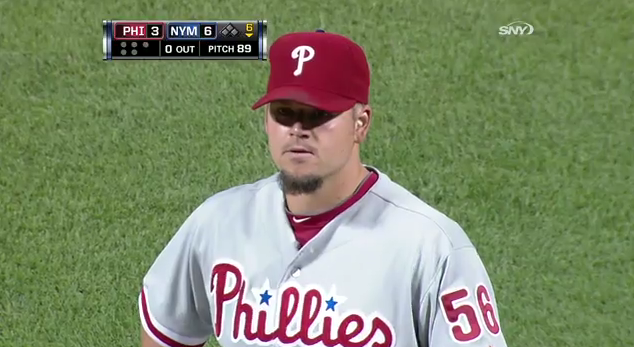 Today Joe Blanton will aim to make right on the mound as he takes on the Miami Marlins. Just a few weeks ago Joe Blanton was pitching as if he were a Cy Young candidate, but in his last three starts he's been back down to Earth and has not been effective. With the series tied one-a-piece the Phillies are looking to take the series from Miami a second time this season.

Joe Blanton (4-5, 5.05 ERA) will make his 11th start of the season, and his second against the Marlins. In Blanton's first seven starts he had a 4-2 record with a 2.81 ERA, but in his past three Blanton is 0-2 with a 12.51 ERA. The skyrocketed numbers seem to have Blanton going back to his "normal self" right when Roy Halladay goes to the DL. In Blanton's last start on Tuesday against the Mets, he was lit up with six runs on nine hits over 5 innings in a losing effort. Blanton has allowed 19 earned runs in his last three starts (13 2/3 innings). Back on April 12, Blanton tossed seven strong innings against the Marlins, allowing one earned run on three hits while striking out three to earn the win. In his career, Blanton is 7-2 with a 3.10 ERA against the Marlins.

Opposing the Phillies today is Carlos Zambrano (3-3, 3.00 ERA), who is making his 11th start of the season with the Marlins. You can say that Zambrano has been effective for the Marlins this season. He has allowed just 22 earned runs over 66 innings pitched, but he has been a victim of 2009 Cole Hamels Syndrome. Zambrano has received little run support this season and has been dealt with four no-decisions and two tough losses. In his last start, however, Zambrano earned the win over the Nationals, allowing three earned runs over seven hits through 6 innings. Zambrano is making his first appearance against the Phillies this season and in his career he holds a 4-4 record with a 4.26 ERA against them.

In other news, Jose Contreras is done for the season after tearing his UCL and his flexor pronator tendon during Friday's game. It's a shame, it really is. The guy worked so hard to get back to the team and then this happens. Although he'll require Tommy John Surgery, Contreras wants to come back at it after he heals. At 40 years-old it's hard to see Contreras pitching again, but then again Jamie Moyer (49) did it.