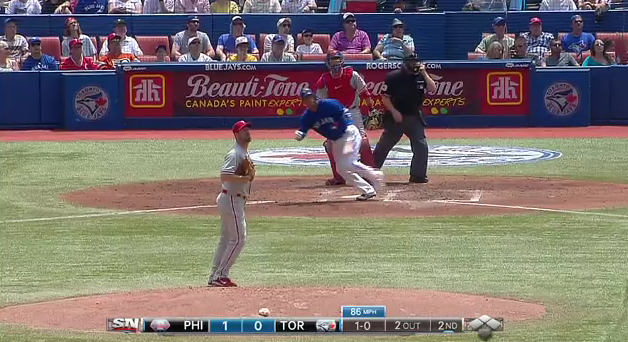 Well it hasn't happened yet. Cliff Lee is still winless.

We'll get short and to the point today. The Phillies scored five runs, including a three-run shot by John Mayberry Jr. in the third inning.

Cliff Lee allowed three runs on a season-high 12 hits over seven innings against the Blue Jays today. Lee had allowed just a home run and one other run before the Blue Jays rallied in the 8th. Lee left with a 5-4 lead in the 8th and in came Chad Qualls to relieve.

Well wouldn't you know it? Chad Qualls blew the game yet again after allowing the tying run to score. The Phillies and Jays would go to 10 innings where the Phillies stranded two base runners and failed to score.

In the bottom of the 10th, with two outs, Rajai Davis drove in the game winning run with an RBI single. With their 6-5 loss, the Phillies drop to 31-36, five games under the .500 mark. Cliff Lee remains winless for the longest time in his career.

Tomorrow Kyle Kendrick will aim to prevent the sweep against Toronto. First pitch is at 1:07 PM tomorrow afternoon.