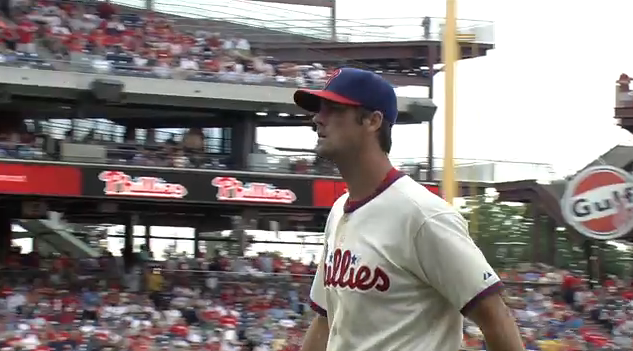 Yes I said miracle. It's that bad right now that the Phillies need a miracle to show some signs that they are not cellar dwellers. The Phillies have dropped from 2 1/2 games out of first to 9 1/2 in just ten games. Not to mention they have lost 9 out of their last 10 games to sink five games under the .500 mark. Last night the offense looked alive against the Twins' pitching, but it was the Phils' starting pitching and shakey bullpen that proved no avail for the Phillies. It is getting really bad and if there is any sign of a hopefull needle in the large haystack of injuries and mediocre play, it's Cole Hamels.

Cole Hamels (8-3, 2.93 ERA) has been one of the game's best pitchers this season, but has hit a rocky stretch in his past three starts. Hamels is 1-2 with a 5.23 ERA in his last three and he has been allowing a lot of multi-run and lead blowing home runs. In his last start, on Thursday against the Dodgers, Hamels allowed three earned on six hits over six innings. Hamels struck out six and walked one to get the loss. In one career start, Hamels has one no decision against the Twins and a 3.86 ERA.

On the mound for the Twins will be right hander P.J. Walters (2-1, 4.42 ERA), who will be making his seventh start of the season. The 27-year old rookie has been solid for the Twins this season. Despite a high ERA, Walters has the ability to go deep into the game and even go the distance. In Walters' last start, on Friday against the Cubs, he was rocked around as he allowed five earned runs on eight hits over five innings of work. With a 23:14 K/BB ratio, Walters can be ancy around the dish, but he can also get ahead of hitters. Walters has never faced the Phillies before in his career.

The Phillies need something and they need it bad. Their bullpen is a joke, Cliff Lee can't catch a break, Kyle Kendrick is Kyle Kendrick and without Roy Halladay in the rotation there is no leadership on the mound. The bats mashed out 14 hits last night and scored 7 runs. Hopefully Cole can go deep into the game tonight and only be relieved by Jonathan Papelbon. We'll see.