Hardest Part of 2012: Knowing when to let go 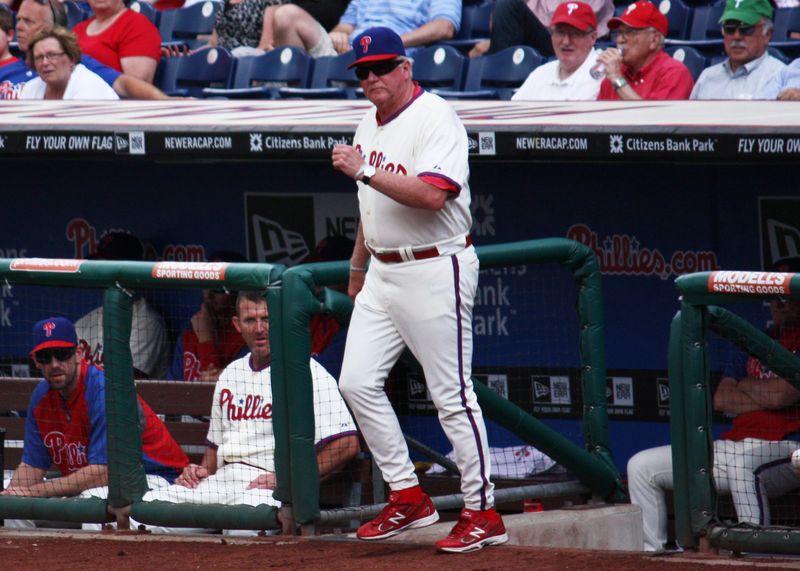 Charlie Manuel and the Phillies are 30-34 and 9 1/2 games back in the NL East on June 14, but that hasn't stopped Phillies fans from watching. (Philliedelphia/Kevin Durso)

On June 14, this is certainly a place where we expected the Phillies to be. Perhaps more importantly, we certainly didn't think ten weeks ago that we would be celebrating a 9-8 win like it was the World Series simply because it goes into the win column.

Yesterday morning, following the Phillies' 11-7 loss to the Twins on Tuesday, Rich asked the all-important question in an excellent post: should we even care anymore?

The answer is a resounding yes based on the outpouring of defense I saw from fans on Facebook and Twitter both at the post and as last night's game approached.

First off, there are more than a few fans willing to say they would stand by this team no matter what. Then, as it is on every night, I and a familiar crowd of Phillies fans watched and commented via Twitter on the game as it happened. This is not something that happens once a week. This is a daily event. These are genuine baseball fans, and most of them have written pieces right here on this site.

Here's the thing about being a fan. Many of these people have seen days worse than the glory years of 2007-2011. So, this is not necessarily something they haven't seen, it's just not something you're used to.

I remember after watching the ballpark quickly empty in the middle of the Phillies' 8-3 loss to the Dodgers a week ago, I told my dad on the ride home that I was sorry I ever laughed at the Mets for being as bad as they were in 2009. Philly fans live for New York failure. It's essentially a way of life. But remember that when the Phillies' reign of supremacy began, the Mets were also a good team. Suddenly, in 2009, they fell apart thanks to two things: injuries and weak talent trying to fill the void. What do the Phillies have this season? Lots of injuries and not-so-great talent trying to fill in.

The Phillies aren't 30-34 and 9 1/2 games back in the NL East sitting in last place all because of tough luck and injuries. They have also played bad, and therefore the play warrants the result.

I'm on the same side as every Phillies fan taking the optimistic approach, saying that it's not over – because it isn't – and staying faithful. For many of us, it's the only thing we've ever known to do, possibly because the Phillies hadn't really let us down before. They completed the improbable comebacks, made history, won championships, made playoff runs and made believers out of many who had given up on believing. It is, sadly, getting harder to believe in this team this season.

The reason I know that people still care is because many of you are a lot like me. You will swear not to watch the next game in the midst of the massive losing streaks, after the walk-off losses or when the team can't hold a lead, but you come back every night because it would take forces of another nature to separate you from the game and team you love that we love too.

Here's my word for Phillies fans. I'm right there with all of you on not giving up, not that anyone I know is giving up either. But, should things not seriously start to turn around by the All-Star Game a month from now or the trade deadline at the end of July, the best thing to do is let go.

Honestly, it is painful to watch the Phillies even win games right now. I've rarely seen a game that the Phillies have won that looked easy. The wins they get painfully at the very least satisfy until the next day. When they lose those games, they bring out the bad in fans. When they lose miserably, it gets worse.

The idea is that the sooner Phillies fans come to terms with what this team is doing, dealing with in terms of injuries and talent, and possibly just not meant to be a playoff team this season, the better off you'll be.

Obviously, that's easier said than done. It's not easy even trying to fathom the thought of another team winning the NL East. Not now. Not with three of the best pitchers in baseball at the moment. Not with a lineup that on paper could do serious damage.

Unfortunately, paper doesn't get you anywhere and it has to happen on the field. It hasn't this season, and now the Phillies are in a bigger hole than they were even in 2007. Faith is running thin.

But perhaps winning the NL East is what people keep focusing on. Remember that there are two wildcard teams in each league now. The deficit for the wildcard is not nearly as enormous as the 9 1/2 in the division is.

The other important thing to remember is how quickly the tide can turn. The Phillies simply need to win games every day. That's it.

On June 1, after the Phillies beat the Marlins, 6-4, the entire NL East, first to fifth, was separated by 2 1/2 games. Two weeks later, the Nationals are leading the entire division by five games thanks to a six-game win streak and an 8-2 record in their last 10 games.

There are 98 games left in the season, so that is why I agree wholeheartedly it is too soon to call it a season. But as the length of the season decrease to 75 games, 50 games, 30 games, remember that it is not 2007 anymore. The Phillies will need to be in a position to strike. And if they're not, it is a fact that you'll have to accept. And the sooner you do, the less it will hurt.