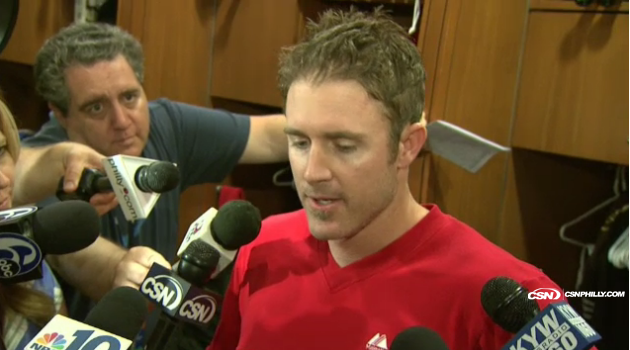 It's good news for Chase Utley and the Phillies. The second baseman will be headed to Clearwater tomorrow  to begin rehab. The Phillies are in need of Utley's bat and this is a good start for the team and Utley. Utley will participate in extended spring training games down there. But what exactly are extended spring training games and what's the difference between it and what Utley has been doing now?

Well for starters, extended spring training is a structured program of workouts, rehabilitation sessions, simulated games and exhibition games. If a player is deemed ready to participate in full-season league action, he is promoted to an appropriate-level farm club. When the "short season" Class A and rookie leagues begin play in late June, extended spring training players are assigned to those rosters, placed on the DL, or released.

So Utley has been doing workouts up here and down in Arizona, but he has been very, very slow with it. He's been taking ground balls of late as well as batting practice in an effort to make it back to the club that needs him. So if it makes any difference, it's definitely these things:

This is good news for the Phillies. Along with Utley's news, first baseman Ryan Howard has been doing great down in Clearwater rehabbing his left Achilles'. Howard should be ready by the All-Star break, but Utley still has no time table.

“I’ve made some strides over the past few months and I’m ready to take the next steps,” Utley said after Sunday’s game.

Utley's plan is to work on his hitting enough that he'll be able to make at-bats in extended spring training games. He doesn't want to rush things, but every day is a new day.

“[I’m] just trying to feel comfortable on a daily basis,” he said. “There were times when I felt good one day and then didn’t feel so good. Right now I’m feeling good on a daily basis so I’m headed down to Clearwater to get some at-bats. I’ll start out by DHing and I’ll be able to see some pitches and get my timing down and when the time is right, I’ll get out on the field and work there.”

Until Howard and Utley return, the Phillies are hoping to keep their heads above the water.