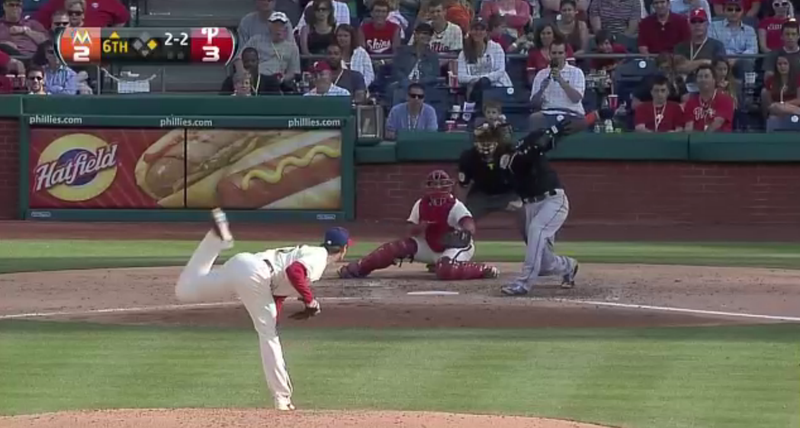 Cole Hamels took the mound this evening looking for his ninth win, which would lead the majors. After allowing five runs for the first time since last July, he would take the loss after the Phillies' offense failed to come from behind.

After a quick 12-pitch inning from Hamels, Carlos Ruiz (who else?) put up the first run of the game with an RBI groundout, scoring Juan Pierre.

Jimmy Rollins sent home a run of his own with an infield single in the bottom of the second, putting the Phillies up 2-0. To start off the bottom of the third, Hunter Pence sent a ball over the head of Giancarlo Stanton for a solo home run. 3-0 Phils.

Hanley Ramirez came back with home run to left field in the fourth, which was reviewed at first, but was indeed a homer. 3-1.  Hamels struggled a bit in this inning, allowing a single to Logan Morrison, and an RBI double to Justin Ruggiano. He made it out of the inning with a lead still intact.

However, Hamels wouldn't get out of the sixth without allowing a few more runs. With Omar Infante on base, Ramirez hit another dinger to left field, giving his team a 4-3 lead.

The Marlins took a 5-3 lead in the seventh thanks to an RBI double from Jose Reyes. It was at this point that Charlie Manuel would bring the bullpen into this game.

Michael Schwimer, called up this morning from Lehigh Valley pitched 1/3 third of an inning, walking Stanton before being replaced by Raul Valdes. Valdes ended the inning with a double play.

The Phillies did a whole lot of not scoring after the fourth inning. Thankfully, Jimmy Rollins led off the bottom of the eighth with his first triple of the year. After Juan Pierre walked and Ricky Nolasco was taken out, Hunter Pence served up a sac fly to Stanton to score Rollins.

Steve Cishek is so good that he got Carlos Ruiz to strikeout. Shane Victorino was the last hope, and he walked to put runners on the corners. Ty Wigginton struck out to end the inning. But, the Phillies were behind by only one run.

Valdes pitched a 1-2-3 ninth before Heath Bell entered for the bottom of the ninth. Placido Polanco singled to lead off the inning (replaced by pinch-runner Mike Fontenot) but would not make it home. Phillies dropped the second game of this series, 5-4.

The rubber match of this series will be tomorrow at 1:35. Joe Blanton will square off against Carlos Zambrano.