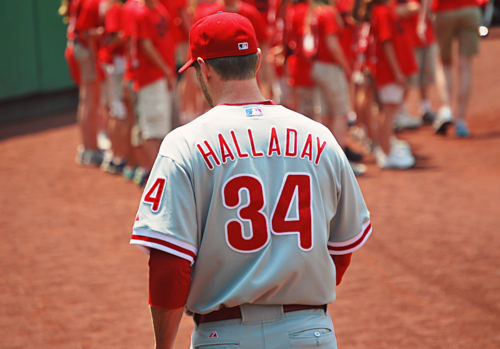 Well hopefully this will chipper you up after tonight's game.

Roy Halladay threw 33 pitches during a bullpen session today, working on all of his pitches. Halladay has been sidelined with a strained lat muscle since May 29 and was put in "shutdown mode" for three weeks. Halladay was expected to miss "six to eight weeks", but after today's bullpen session. Phillies pitching coach Rich Dubee thinks differently.

Dubee noted that Halladay is "a few days not weeks" ahead of schedule and will pitch another bullpen session this week. It is unclear if the Phillies will send Halladay on a rehab assignment, but even the coaches don't know yet.

We'll all hope for the best for Roy and hope that he can come back soon to help the Phillies stop sucking.