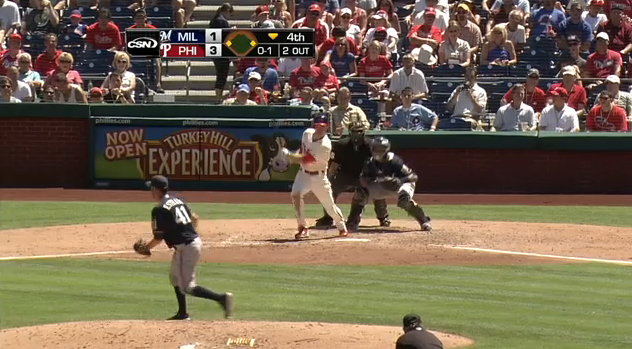 Merry Christmas in July, everyone! Cole Hamels' fresh six-year contract extension was a pretty sweet gift, but how about a sweep? The Phils sent the Vanimal, Vance Worley to the mound to silence the Brewers and go for the first series sweep of the year.

Martin Maldonado would bring home the first run of the game in the top of the second. He singled to plate Corey Hart, giving his team a 1-0 lead.

In the bottom of the inning, Erik Kratz singled to send Juan Pierre home from second, tying up the ballgame at one.

Shane Victorino came around to score in the third inning on a double to deep left center from Chase Utley. Utley later scored on a single from Hunter Pence, giving the Phils a 3-1 lead.

In the fourth inning, Utley caused further damage to the Brewers' starting pitcher, Marco Estrada, by sending home Kratz and Victorino with another deep double. 5-1 Phillies.

In the sixth, Rickie Weeks sent a ball deep into the seats in left field for a solo home run. In the same inning, Cody Ransom was brought home on a double from Carlos Gomez. That would be all from Vance Worley with a 5-3 lead.

All looked like smooth sailing until Antonio Bastardo gave up a two-run home run to Ryan  Braun in the eighth, tying the ballgame.

Jonathan Papelbon got into a jam in the top of the ninth, but he worked himself out of it without allowing the Brew Crew to take the lead. John Axford would strike out the side in the bottom of the ninth, sending this game to extra innings.

Michael Schwimer came in for the tenth. He walked one and allowed a run to score on a sacrifice fly from Aramis Ramirez.

Francisco Rodriguez in for the bottom of the tenth? Not a good move. John Mayberry, Jr. walked and made it to third on a double from Erik Kratz. Carlos Ruiz then hit a sac fly, tying the ballgame. Next, Jimmy Rollins singled to bring home the winning run, winning the ballgame for the Phillies, 7-6. It's their first sweep of the season, and third straight 7-6 win.

Off day tomorrow, then a three-game series with the Braves starting Friday at 7:35