Utley, Chooch Help Lee Get His First Win of the Season 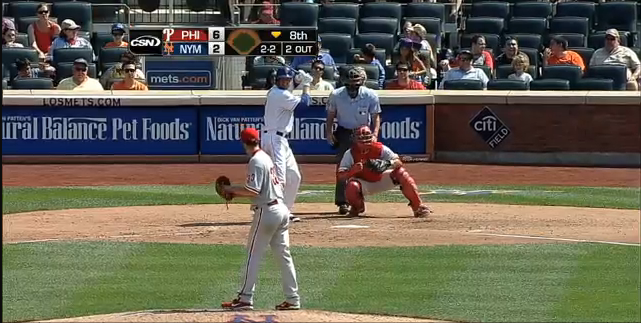 Did Cliff Lee win a game yet? Is he hurt?

It is basically the story of the first half. We all know that Cliff Lee has not been the Lee we saw last season. Phillies have been 7-1 since 2004 on July 4th including two walk offs against the Mets.

Cliff Lee and Chris Young were throwing zeros until the fourth inning. Scott Hairston put the Mets ahead with a solo homer in the fourth, lining an 0-2 pitch over the left-field wall. David Wright drove in the run with a bloop single in the 5th. Mets had a 2-0 lead.

Cliff Lee gave up two runs on seven hits, while striking out nine and walking one in eight innings, which is very-Lee like outings.

It actually only took six innings to finally have something cooking for the Phillies. Juan Pierre led off the seventh the Phillies' third hit, a single to center, and Utley followed with a laser two-run home run down the rightfield line also known as Utley's corner. It was the second homer for Utley, who returned from a season-long bout with knee problems on June 27. Then the next batter, all-star Carlos Ruiz, homered into the leftfield seats to give the Phils a 3-2 lead. It is the second time this season both Utley and Ruiz homered back to back.

The Phils scored three more in the eighth, highlighted by a double from Jimmy Rollins that snapped a personal 0-for-18 drought on the road trip. They scored three in the ninth, too, capped with a two-run home run from Ty Wigginton (9th of the year).

Jonathan Papelbon got his first work in eight days in closing out the game, pitching a scoreless 9th. Cliff Lee and Chase Utley gets their first wins of the year.

After the game, something happened during the post-game interview with Cliff Lee… Roy Halladay and Cole Hamels gave him a Gatorade bath!!!!

Cole Hamels vs R.A Dickey rubber match tomorrow at 705pm! Be there!