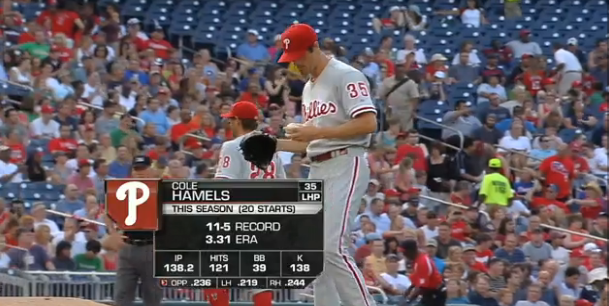 Last night was just another example of the 2012 Phillies. Poor play, no drive to play for win and the inability to hit with runners in scoring position. Vance Worley allowed four earned runs on six hits through 3 2/3 innings, but left early with what was later diagnosed by Charlie Manuel as "stomach issues". The Phils lost pretty heavily to their NL East rivals last night, but Cole Hamels (11-6, 3.34 ERA) has the chance to even up the series tonight. He'll take on Mike Minor (6-7, 5.01 ERA) in game two of three against the Braves tonight.

In Hamels' last start, against the Nationals on Thursday, he was tagged for three earned runs on eight hits over seven innings in a losing effort. Hamels allowed the three runs in the second and third innings and was smooth sailing from then on out. With Ross Detwiler holding the Phillies scoreless through seven innings of his own, Hamels was given no run support and was handed his sixth loss of the season. Hamels has not won a game since July 15 against the Rockies. On July 27th, Hamels was tagged for five runs (3 earned) over five innings against the Braves. Hamels lost that game. In his career, Hamels is 11-7 with a 3.75 ERA against the Braves.

In Mike Minor's last start, on Thursday against the Marlins, he pitched just 3 2/3 innings before his start was interrupted by a rain delay. Minor would not pitch the rest of the night, he had allowed just two hits and two walks in a game that his team would end up winning 6-1. In Minors' start prior to that, he tossed eight innings of four-hit, one-run ball against the Phillies. Striking out 9 Phillies, Minor earned his sixth win of the year. Minor led all of the NL pitchers with an opponents' batting average of .172 in the month of July while posting a 2-1 record and a 1.98 ERA in four starts that month. Minor will look to extend his success into the month of August.