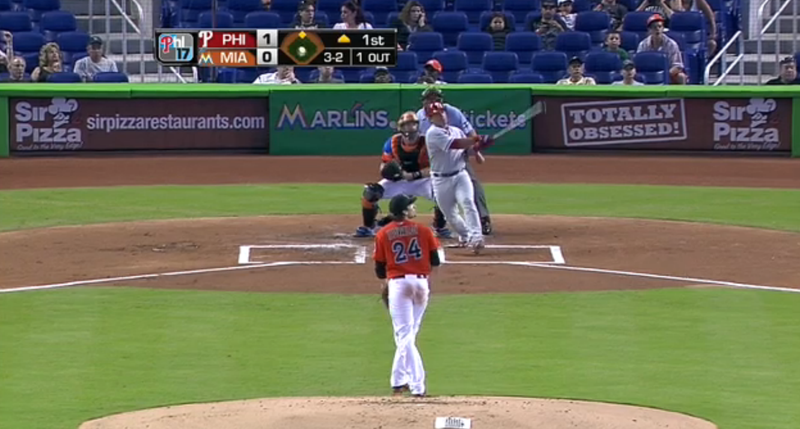 Cole Hamels this afternoon continued and ended his spectacular season. In Cole's final start, he was looking to shut down the Marlins and give the Phillies the series win, which would put them over .500 again. In what has been Cole's most impressive season in the major leagues, he didn't fail to impress in this ballgame.

The Phillies gave their starter a 3-0 lead in the first inning against Nate Eovaldi. First, Jimmy Rollins scored on a sac fly from Chase Utley. With Juan Pierre on base, Carlos Ruiz doubled to deep left, bringing Pierre home. Then, Nate Schierholtz doubled to score Ruiz. Not an easy inning for Eovaldi, but the Phils were ahead by three runs.

Cole Hamels had a perfect game going through the first three innings. In the top of the fourth, Bryan Petersen got the first hit for the Marlins with a single up the middle. Petersen made it to third after Jose Reyes doubled, then was tagged out at home after Giancarlo Stanton grounded into a fielder's choice. Carlos Lee singled to right field which scored Jose Reyes, but Stanton was tagged out at home thanks to a perfect throw home from Domonic Brown.

The game remained 3-1 through the next couple of innings. Cole was still looking very sharp, as did Dan Jennings for the Fish. Eovaldi went six innings tossing 105 pitches. He allowed just those three earned runs in the first inning. He also struck out seven and walked one.

In the top of the eighth, the Phils scored one more run for Cole Hamels. Chase Utley led off the inning with a single, and Ruiz followed with a single of his own. Utley scored on a sac fly from Domonic Brown, making it a 4-1 game. Nate Schierholtz singled, followed by a fielder's choice which allowed Ruf and Schierholtz to move into scoring position while Ruiz was caught in a rundown. Kevin Frandsen lined out to end the inning.

Cole's afternoon was done after seven brilliant innings. He allowed just one run on five hits, walking one and striking out eight. He tossed 99 pitches, 68 for strikes. He ends his season with a 3.05 ERA, 216 K's (career high) and a 17-6 record.

Antonio Bastardo, as dominant as ever, struck out two in the eighth inning. A quick 1-2-3 inning once again from Tony, who is most likely a definite in the Phillies bullpen next season.

Jonathan Papelbon came in to close it out and send the Phils to a series victory. With one out, Stanton and Lee both singled. Donovan Solano struck out for the second out, and John Buck did the same to end the game. Phils win, 4-1.

The Phillies will start a three game series tomorrow in Washington, this will be their final series of the 2012 season. Kyle Kendrick will take the mound for the Phils. The Nationals aren't sure who will start for them just yet. First pitch at 7:05.