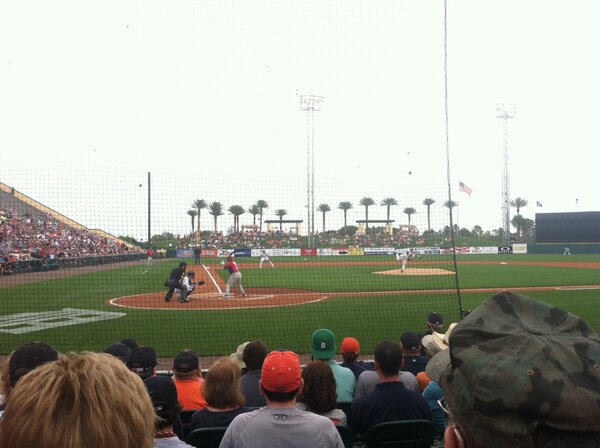 Day two of spring training games brought about quite a match-up, Roy Halladay vs. Justin Verlander and the Detroit Tigers.

Doc had no problems in the first inning, dealing through Austin Jackson, Torii Hunter, and Miguel Cabrera perfectly. In the bottom of the second, Doc struck out Prince Fielder to kick off the inning. Victor Martinez put the Tigers on the board with a solo homer to center field. Doc retired the side after allowing that run.

Freddy Galvis had doubled in John Mayberry, Jr. in the top of the second, which gave the Phils the lead up until Martinez's solo shot.

Doc's afternoon was done after two innings. He allowed just one hit, the homer to Martinez, while striking out two and walking none. Solid.

The Phils took a 3-1 lead in the top of the third inning after Jimmy Rollins scored on a double from Carlos Ruiz, then an RBI double from Ryan Howard which brought home Chooch. In the fourth, third baseman Kevin Frandsen homered to left field to make it a 4-1 ballgame.

In the fifth, Jake Diekman took the mound and allowed a run on one hit. After walking Austin Jackson, pinch runner Daniel Fields stole second, then made it home on a single from Fielder. Diekman struck out two in the inning, Hunter and Cabrera.

Joe Savery saw an inning of action allowing two hits and striking out one. Rodrigo Lopez replaced Savery in the seventh and struck out two swinging before retiring the side.

In the top of the eighth with Al Alburquerque on the mound, Domonic Brown tied the ballgame with a pinch-hit solo home run to the bullpen in right field.

A scoreless ninth inning turned into extra innings in Lakeland, Florida. After one more scoreless inning featuring an appearance by Justin Friend, they called it quits and ended in a 5-5 tie.

The Phillies will report home tomorrow afternoon at 1:05 against the Tigers. Cliff Lee will be making his first start of spring training.