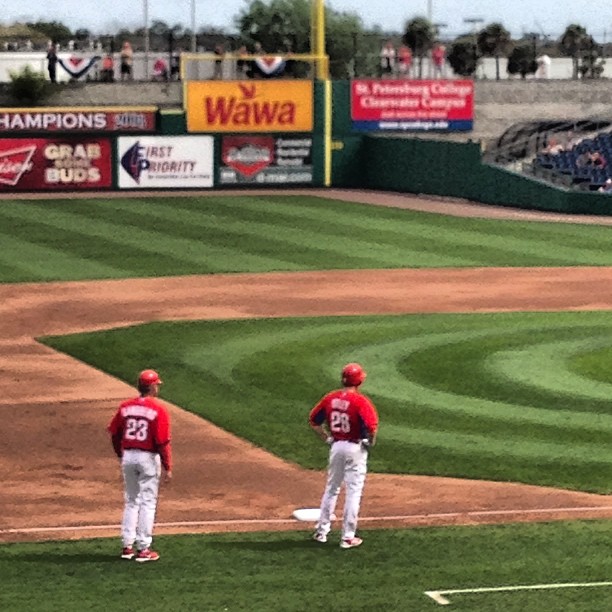 Smell that? That's the smell of Phillies baseball. The first official spring training game started this afternoon in Clearwater with Cole Hamels on the mound against Lucas Harrell and the Astros.

Cole pitched a solid two innings today allowing just one hit, walking none, and striking out one.

Chase Utley hasn't seen a single pitch during spring training since 2010. The first pitch he saw this afternoon was ripped into center field for an RBI single, scoring center fielder Ben Revere. 1-0 Phillies after the first inning.

B.J. Rosenberg saw two innings in today's ballgame, and it wasn't a smooth ride for him. His line included five hits, three runs, and one walk.

Zach Miner, former Kansas City Royal, came in for the fifth inning for Philadelphia. After allowing two singles, Robbie Grossman brought home Brandon Barnes with a single that was misplayed by Ben Revere in center. A groundout from Freiman brought home another run. 5-2 Houston.

The Astros brought in Jarred Cosart for the fifth and sixth innings. Cosart, a  pick of the Phillies in the 2008 draft, dealed two perfect innings against his former team.

With Jeremy Horst on the mound in the seventh inning, Brandon Barnes proceeded to smack the life out of a baseball and send it to the berm in center field. 6-2 Astros. Horst pitched two innings this afternoon, allowing just that run on three hits, walking none and striking out none.

Justin De Fratus took the mound in the top of the eighth and allowed one hit, one walk, and one earned run. The run came from an RBI single from Jimmy Paredes, scoring Delino DeShields.

Pete Orr single-handedly made this game 7-3 with a solo home run to center field. Orr will be representing team Canada this year in the World Baseball Classic.

Grossman doubled in the ninth to bring home a run, making it an 8-3 game. De Fratus was charged with the run in the second inning of his outing.

The Phillies couldn't come back in the bottom of the ninth despite Jermaine Mitchell's triple which ended up being wasted on a double play from Mayberry.

That wraps up the first game of 2013 spring training. The Phillies and Tigers will go head to head tomorrow at 1:05.