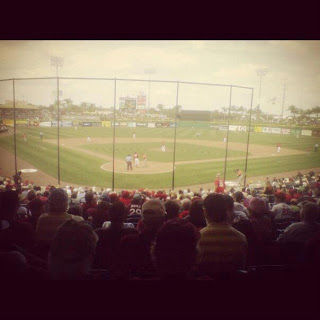 Lots has happened since my last writing, but we're still a far way from declaring a Phillies roster. Cliff Lee was excellent in his first start yesterday, as Hamels and Halladay were in their's, all good signs for the Phillies. Chase Utley was scratched today though, however the game is in rain delay, so that makes sense. Dom Brown's hitting bombs, and that's a good sign. Here's High Cheese's breakdown yesterday.  Here's today's. Oh, and in case you missed it, Michael Schwimer got traded, and was surprised.

I'm pleased with the early going, to the extent you can be. These games don't count and the starters don't always play. The pitchers look healthy though, Utley and Howard are playing, Howard's playing well, and Dom Brown looks ready. I'm not overly concerned about the overall results yet though.

I'm giving Stutes the benefit of the doubt, for now, on his bad outing. It's his first one, and a lot of the other contenders have struggled. Inciarte's been impressive, though I think his best chance to stay is to be offered back and then traded for. He's raw, but talented.
Now, my Lehigh Valley roster predictions, which changed a bit by the trade of Schwimer.
A crack at Reading's rotation at least- Morgan, Biddle, Rodriguez, Colvin, Wright. As for the Pigs, this will change, as it would be a dream for all of these guys to accept assignments. For the most part though, this does give you a look at some of the guys who will be here. The closest battlers off this team so far, in my mind, are Morgan, Cody Asche, and maybe Leandro Castro makes a run here. I'm also impressed with Justin Friend's numbers at the least.
Lots will change as the games roll on, but this is a good place to start from, for now.
Topics
Uncategorized