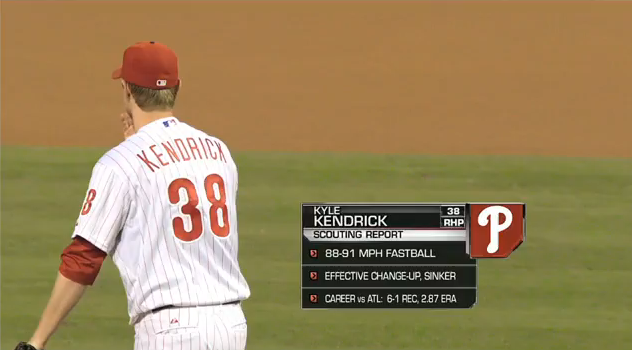 In five of his six wins this season, Cliff Lee has snapped a two-game losing streak for his team. He has been solid so far this season and it looks like he is heating up to go on one of his hot streaks on the mound. Last night Cliff continued his dominance on the mound with eight innings of one-run ball against the Red Sox. He struck out eight batters and walked none to take his sixth win of the year as well as giving the Phillies a 1-1 split in Boston. Tonight the four-game series between the Red Sox and Phils continues as the home field changes back to Citizens Bank Park for the final two. Kyle Kendrick (4-3, 3.29 ERA) will take on John Lackey (3-4, 2.72 ERA) in game three tonight.

Kyle Kendrick has struggled in his last two starts. After allowing 15 earned runs in 54 2/3 innings in his first seven starts, Kendrick has allowed nine earned runs in 11 innings over his last two. It may just be a bump in the road for Kendrick, who has arguably been the Phillies best pitcher all year long. In his last outing, Kendrick gave up five earned in five innings against Washington. Kendrick took the loss, his second straight and third on the year. Kendrick has struggled with command, falling behind in counts and walking eight in his last two starts. He will look to gain back his command tonight as he takes on the Red Sox, a team he has gone 0-3 with a 10.80 ERA in three career starts.

John Lackey is coming off of his best outing of the year. The veteran right hander went seven scoreless against Cleveland, allowing two hits while striking out eight. Lackey picked up his third win of the year, his second in a row after losing three straight. Lackey has re-discovered himself after missing out the entire 2012 season due to Tommy John surgery. With a 2.72 ERA in seven starts, Lackey has the second-lowest ERA for Boston starters (Buchholz – 1.73 ERA). In four career starts against Philadelphia, Lackey owns a 2-2 record and a 3.12 ERA.