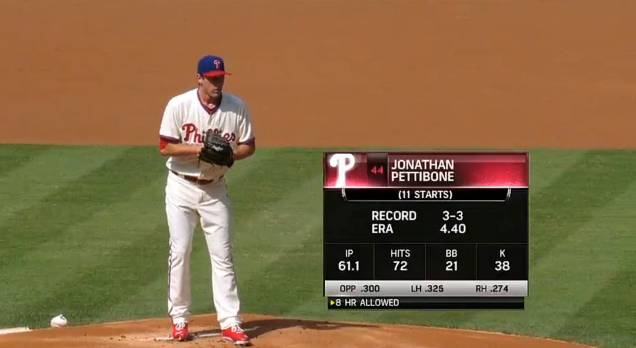 The Phillies are coming off of a series win in San Diego against the Padres. Last night the Phillies pulled out a win in 13 innings. Despite Cole Hamels allowing five earned runs, the Phils were able to tie it up late in the game and take the lead and allowing Jonathan Papelbon the chance to save his 15th game of the year. Back to three games under .500 the Phillies will continue their road trip out west and travel 120 miles north to Los Angeles to open up a three-game series with the Dodgers. On the hill in tonight's opener will be Jonathan Pettibone (3-3, 4.14 ERA) and Zack Greinke (4-2, 3.79 ERA).

Jonathan Pettibone was pulled early from his last start due to lower back stiffness, but was cleared for his next start after a successful bullpen session on Monday. Pettibone lasted six innings on Saturday against the Mets, allowing an earned run on five hits. Pettibone had struggled in his other starts previous to Saturday, allowing 10 earned runs in 8 1/3 innings in two starts. In his last three, Pettibone is 0-2 with a 6.91 ERA. Pettibone will look to take it to the Dodgers for the first time in his career without any stiffness this evening.

Zack Greinke is coming off of his best start of the year on Saturday against the Padres. The veteran right hander went eight strong innings, allowing an earned run on four hits while striking out eight batters. In his eight starts since coming back from the disabled list (collar bone), Greinke is 3-2 with a 4.38 ERA (22 ER in 45 2/3 IP). Greinke has gone at least seven innings in three of his last four starts and owns a  3-0 record with 2.12 ERA in five starts at home this season. In three career starts against the Phillies, Greinke is 1-1 with a 2.40 ERA.