Michael Young: “I Don’t Think We’re Anywhere Right Now Where Anything Is Imminent” 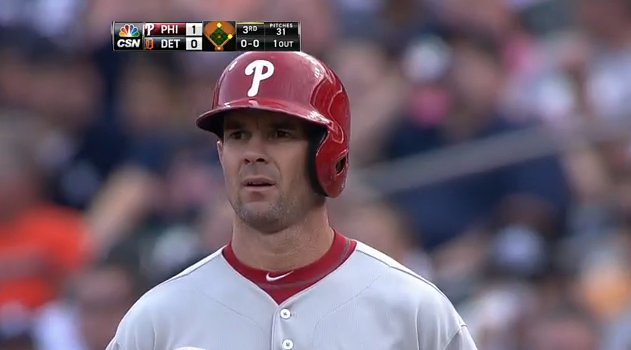 Whether you like it or not, Michael Young is the most likely Phillie to be traded before tomorrow's 4 PM ET. deadline. Young, who has been rumored to be involved in a trade that could potentially send himself and teammate Cliff Lee to the Boston Red Sox in return for prospects.

Although Ruben Amaro Jr. noted that he feels there is a "very little chance" that Cliff Lee will be moved, the other was said regarding Young. Young has a no-trade clause in his contract and it has been noted that he would only waive it in a trade back to the Texas Rangers – the team he spent the first 13 seasons of his career with.

Michael Young spoke with reporters before tonight's game with the Giants regarding the rumors surrounding his status on the market.

When asked about only accepting trades to the Rangers, Young responded "Those things are between me and the Phillies. Young continued to answer questions on his knowledge of any deal involving himself.

(All quotes courtesy of @ToddZolecki)

"I don't think we're anywhere right now where anything is imminent," Young said.

"It's difficult to say," Young answered on whether he thinks he'll be here in 24 hours. "I really don't know. I don't know."

Well if Michael Young is going to be traded, he is definitely going to know because only he can control where he wants to go.