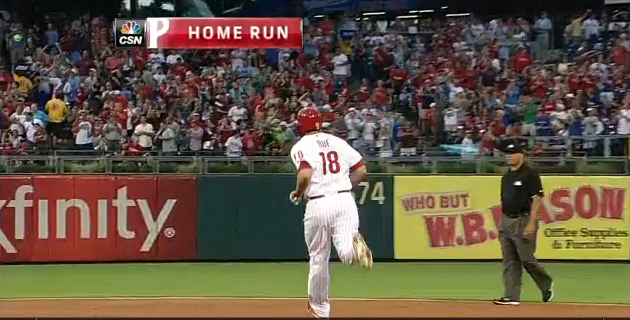 After a nice first inning in which he struck out two and a second inning that was 1-2-3, Martin started getting lit up.  In the third, Jason Heyward singled in Andrelton Simmons.  The fourth was clean but then came the scoring.

Five Braves scored in the fifth inning, all charged to Martin.  The inning featured a double, single, and two home runs to plate four.  Dan Uggla, batting under .200, walked, leading to the end of the night for Martin.

The Phillies turned to former Atlantic League player and former barber/moving company worker Luis Garcia who promptly allowed his interited runner to score the Braves' sixth run thanks to a double to Joey Turdsandwich -er-Truglsdliurehgvich Terdoslavich.

That's all the Braves would score.

As a great sign of respect for the Phillies' outstanding performance, the crowed erupted into some E-A-G-L-E-S chants in the seventh inning, something that hasn't happened since Riley Cooper was drafted by the Phillies and wasn't dropping racial slurs for the Eagles.

Delmon Young got robbed at a chance for the cycle in the bottom of the ninth when a bad umpiring call had him strike out.  Young was a triple shy of the cycle.  The subsequent argument got both manager Charlie Manuel and shortstop Jimmy Rollins tossed.

Craig Kimbrel saved the game for the 9th, making the Phillies look silly 1-2-3.

The Phillies are back tomorrow afternoon at 4:05 to embarrass themselves some more.