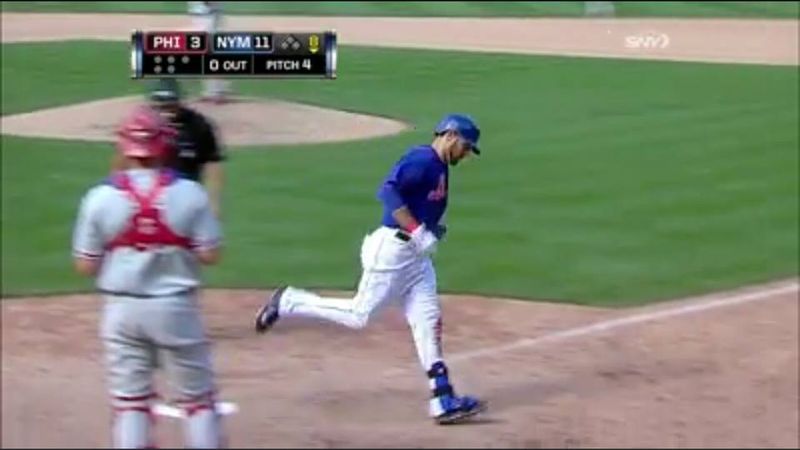 If you want to know a very simple reason why the Mets won this game, just look at the final bx score. After neither team scored in the first two innings, the Mets scored in every inning from the third fame on. It's an unfortunate result that many fans probably could have predicted with Ethan Martin getting the start. Despite his obvious ability, Martin has been anything but solid in his starts this season.

Daniel Murphy helped to get the scoring started in that third inning. His double scored Eric Young Jr., who singled with one away, to open up the score at 1-0. Justin Turner then opened up the fourth by drawing a walk. Anthony Recker's first homerun of the season scored Turner and moved the score to 3-0.

Caesar Jimenez replaced Martin early in the contest, coming in to pitch the fifth. He didn't have much luck either, though, as he gave up Murpy's second double of the game to begin the inning. An Andrew Brown single would score Murphy to improve the Mets' lead to 4-0. The ugliness continued into the fifth, with Recker recording a walk. After Omar Quintanilla popped out, Mets starting pitcher Carlos Torres sacrificed Recker to second. With two outs, Young Jr. beat out a groundball in the infield to put runners on the corners. Jimenez would balk during the next at bat to move each runner up. Murphy would single for his third hit of the game, and helped improve the score to 6-0.

The Phillies were finally able to get on the board in the seventh. Chase Utley and Domonic Brown each singled to start the inning. On a Carlos Ruiz fly out, Utley was able to tag up and advance to third. Darin Ruf's fly out then turned into a sacrifice and scored Utley, ending Torres' shutout bid. After John McDonald singled, Roger Bernadina homered in the following inning to move the Philly scoring to three.

In their half of the seventh, the Mets would score another four runs. A single, hit batter, and a walk loaded the bases for Quintanilla, who also walked to bring home the seventh run. After Ike Davis struck out, Eric Young Jr. tripled to clear the bases and put the Mets in the double digit scoring. Andrew Brown began the eighth with a solo homerun to complete the Mets' scoring at 11. This would be the last run for either squad, and the final score stood at 11-3.

As most of them are, this loss was tough for Philly. Despite nine strikeouts in just four innings, Ethan Martin still could not keep himself in the game. High scoring games like these tend to send teams into bad stretches, so the Phillies will have to look to halt the losing immediately. Their series with the Chicago Cubs will begin at 2:20 tomorrow at Wrigley Field, with the Cubs' Jeff Samardzija taking on Roy Halladay in his second start since returning from the DL.