Eagles Flyers Phillies Sixers About Us Write For Us
Please, Phillies Fans: Jamie Moyer Will Not Be The Phillies Pitching Coach
Chip Kelly: Alex Henery's Job Not In Jeopardy 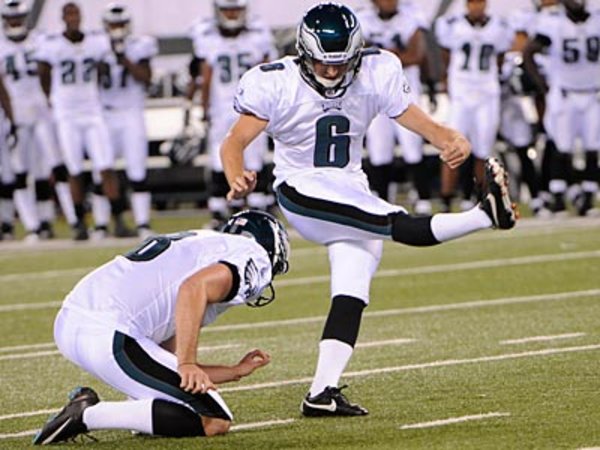 Despite an inconsistent start to the season, Philadelphia Eagles head coach Chip Kelly is sticking with kicker Alex Henery.

Already this season Henery has missed three field goals in consecutive games ranging from 40-49 yards and failed to launch a kickoff out of the end zone Sunday against the Denver Broncos which led to a kickoff return touchdown.

Despite all of that, Kelly is sticking with his kicker.

The third-year University of Nebraska product who finished his first two seasons as the most accurate kicker in Eagles history is just 6-of-9 to start the 2013 campaign.

"It’s interesting when you analyze his three misses, one was right, one was left, one was right," Kelly said. "We look at everything, when someone makes a mistake, how do we correct it. Not that you want them, but if all three of them were left, we’d be analyzing where his plant foot is and how he’s doing, is he swinging through the ball and kind of pulling it, or is he not blocking his hips out and pushing the ball."

In one of the more perplexing moments of Sunday's 52-20 loss at Sports Authority Field at Mile High, Kelly took a delay of game penalty from the Broncos 37-yard line rather than go for a first down or attempt what would have been a 52-yard field goal. It is certainly worth questioning if Kelly's confidence-or lack therof- in Henery factored into the decision to punt in that situation.

Regardless, it does not appear that any change at kicker or any other position is forthcoming heading into the Eagles second NFC East showdown of the season this Sunday at MetLife Stadium against the New York Giants.