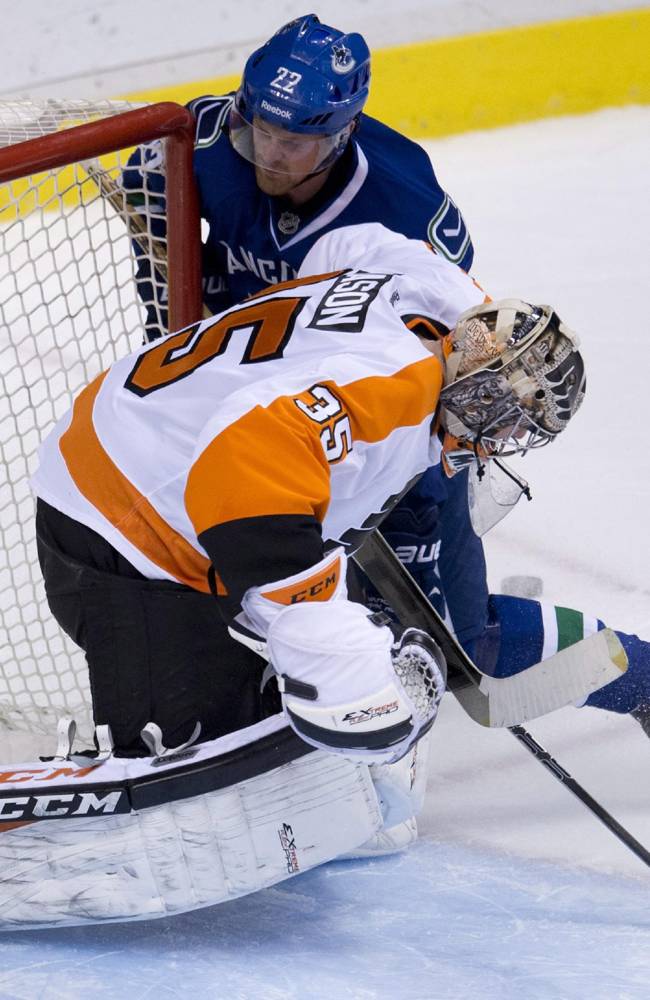 Steve Mason stops Daniel Sedin in the shootout to seal the Flyers 4-3 win over the Vancouver Canucks. (Photo Courtesy of ESPN.com)

When the Philadelphia Flyers played host to the Vancouver Canucks in October, the Flyers were on their way to a moral victory by simply reaching overtime. With 2:25 to play, Ryan Kesler thwarted that with the game-winning goal.

In the penultimate game of December, the Flyers were in the same spot. The Canucks had the Flyers penned in their own zone, and sure enough, struck in the most bizarre fashion. But the Flyers managed a final-minute tally, held off the Canucks in a shootout and grabbed another point with a shootout win.

41 saves by Steve Mason plus three more in the shootout gave the Flyers a 4-3 win over the Canucks at Rogers Arena in Vancouver, British Columbia.

With the first period winding down, the Flyers managed to strike first thanks to the top line. Hard work by Michael Raffl down low sent a loose puck right to Mark Streit who burried it for his fourth goal of the season.

The Canucks managed to tie the game early in the second, as former Flyer Tom Sestito was gifted with a rebound to easily beat Mason.

In the final five minutes of the second, the teams traded goal. A period dominated by the Canucks, they would finally crack Mason as Daniel Sedin found Jannik Hansen alone in front of an empty net to give Vancouver the lead.

The Flyers captain answered moments later with 1:08 remaining in the second. Claude Giroux found a seam and started in on a partial breakaway. With two Vancouver defensemen on his back, Giroux moved in an beat rookie goalie Eddie Lack to tie the game. It was Giroux's 11th goal of the season. It also marked the ninth straight game with a point for Giroux.

For most of the game, the Canucks dominated. The ice tilted in their favor as Mason was pelted with shot after shot and kept the Flyers in the game with several spectacular saves. The Flyers also killed off all three power-play attempts for Vancouver in the game.

But late in the game, a point shot by Daniel Sedin was blockered away by Mason off of Luke Schenn and in to give Vancouver the lead.

In the waning moments of regulation, the Flyers managed the equalizer. A nice feed by Scott Hartnell off a face-off found a wide-open Brayden Schenn. He scored to tie the game at three with 46.8 seconds remaining.

After staving off several chances in overtime as well, the Flyers forced the shootout.

In the shootout, the Canucks elected to shoot first. Mike Santorelli went first and was stopped by Mason. Vincent Lecavalier shot first for the Flyers and scored to give them the lead.

After Kesler fanned on his shootout attempt, Giroux could win it. But Lack was up to the task, stopping Giroux with the pad.

That left things up to Daniel Sedin. Mason stayed with him on the attempt and forced Sedin to throw the shot from in close into his pads, sealing the Flyers win.

With another two points, the Flyers crept closer to second place in the Metropolitan Division. The win puts the Flyers within three points of the Washington Capitals.

It is a quick turnaround for the Flyers as they travel to face the Calgary Flames in a New Year's Eve game.