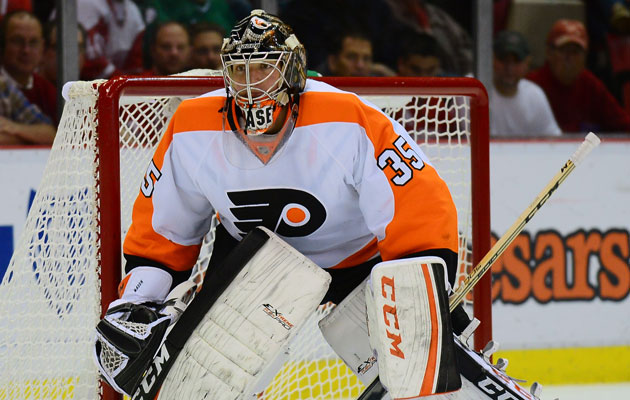 One of the Flyers' top moments of 2013 was trading for Steve Mason at last season's trade deadline. (Photo Courtesy of CBSSports.com)

Calendar year 2013 didn't see the best hockey in Flyers history, but it still saw its share of memorable moments. This week's Flyers Five discusses the most critical moments from 2013, ranked:

5. End of the Lockout — Hockey fans woke up to a belated Christmas gift on Jan. 6, when news broke that the NHL and NHLPA reached a new Collective Bargaining Agreement after a tenuous 113 days. The two parties reached a deal in an attempt to prevent the cancellation of the second season in league history, and without that, this list would be entirely different.

4. Signing Vinny Lecavalier — What initially appeared to be a limited pool of free agents in the 2013 offseason quickly became more exciting with the use of compliance buyouts, which allowed teams to shed large contracts in order to comply with the decreasing salary cap. One example was longtime Tampa Bay captain Vinny Lecavalier, who had seven years remaining and a cap hit of $7.7 million when the Bolts bought him out. The Quebec native was rumored to sign with his hometown Montreal Canadians, but agreed to a five-year, $22.5 million deal with the Orange and Black. Lecavalier, 33, has nine goals and 15 points in 24 games with the club.

3. Firing Peter Laviolette — This may not entirely be the reason why the Flyers are where they're at today, but it still remains a big moment from their year. The Flyers tied a record for quickest a coach had been fired, as he was dismissed Oct. 7 after the team started the season at 0-3. The firing led to a notable press conference with chairman Ed Snider, and the promotion of assistant coach Craig Berube to his first head-coaching job at the NHL level. At the time he was fired, Laviolette was the third-winningest coach in team history.

2. Trading for Steve Mason — When the Flyers traded a third-round draft pick and Michael Leighton to Columbus for Steve Mason at the trade deadline, many panned it as a backup-for-backup swap. After all, Mason had been relegated to the bench following the rise of ex-Flyer Sergei Bobrovsky, and Leighton barely got any time behind Ilya Bryzgalov. However, Mason's been making a strong case to be considered the franchise's Goalie of the Future, as he's posted an 18-11-4 record with a 2.27 GAA and .928 SP in 35 games as a Flyer.

1. Closed-door meeting — Following a 3-0 shutout against New Jersey on Nov. 7, the Flyers conducted a players-only meeting in the dressing room. Nobody outside of the room knows what was said, but it's helped turn the team's fortunes around so far, as a 4-2 win over Edmonton in the next game was the genesis of a seven-game points streak. The team stands at 13-6-3 following that meeting, compared to 4-10-1 before it.