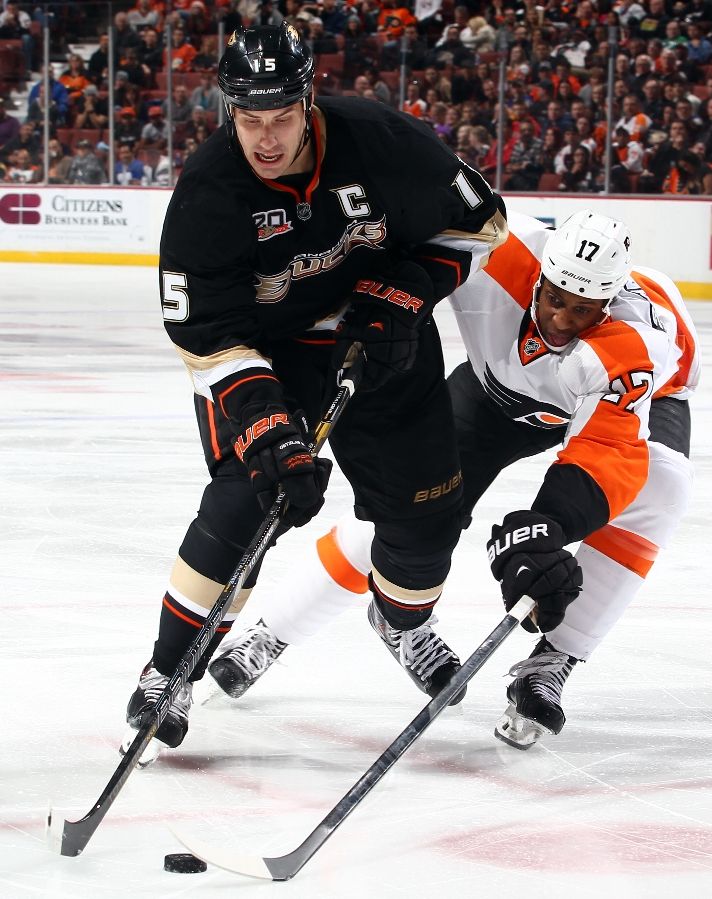 Ryan Getzlaf had a goal and an assist in the Ducks 5-3 win over the Flyers on Thursday night. (Photo Courtesy of ESPN.com)

The thing about good teams is that they always seem to find a way to win no matter how much a team may outwork the opponent. Facing the NHL's best, the Philadelphia Flyers played a game that on most night would result in two points.

But that's the thing about the Anaheim Ducks. They are a good team. And the slightest mistake can be the downfall of a team.

That was the story, as the Ducks top line did the most damage to take a 5-3 win against the Flyers on Thursday night at Honda Center.

The Flyers controlled most of the first period play, but the Ducks managed two tallies. Patrick Maroon tipped a shot past Steve Mason for the game's first goal at 10:38.

The Flyers would answer on the power play with a goal by Vincent Lecavalier just four minutes later. But with 35 seconds left in the period, Ryan Getzlaf tipped a second goal for the Ducks, giving them the lead.

The lone goal of the second period came from the Ducks top scorer. A bad pinch set up an odd-man rush for the Ducks. That allowed Corey Perry room to set up on front and bury a one-timer, on a pass from Getzlaf, to give the Ducks a two-goal lead.

With 14:12 remaining in the second, Matt Read was in the right place to get a deflection for the Flyers second goal, cutting the lead to one. The Flyers would also get a power play with under nine minutes to play, giving them a chance to tie the game. But bad passing and poor puck-handling allowed a short-handed two-on-one for the Ducks. Saku Koivu fed Daniel Winnik for a short-handed goal.

The Ducks would add an empty-netter by Koivu. Michael Raffl also scored with nine seconds left in the game to cap the scoring.

Anaheim's top line accounted for two of the goals. Ultimately, it was the depth of the Ducks that did the bulk of the scoring. 11 players recorded at least one point in the game.

The Flyers got goals from the lower lines in the loss. Steve Downie assisted on Lecavalier's goal for his 100th career assist.

Despite the goal, Lecavalier was minus-3 for the game as were teammates Wayne Simmonds and Kimmo Timonen. Scott Hartnell and Claude Giroux were minus-two, making the Flyers top line a combined minus-7.

That said, the Flyers generated chances throughout the game. If not for a solid effort in goal by Frederik Andersen, making 27 saves on 30 shots, perhaps this is a different.

There was nothing wrong with the effort of the Flyers. On most nights against most teams, this may have actually been enough.

But the Flyers are playing the best of the best on this West Coast trip – the best goalies, the best teams and some of the best scorers. The Ducks showed that even their best effort can still mean two points. That is a far cry from where the Flyers sit right now.

The Flyers return to action on Saturday afternoon against the Los Angeles Kings.