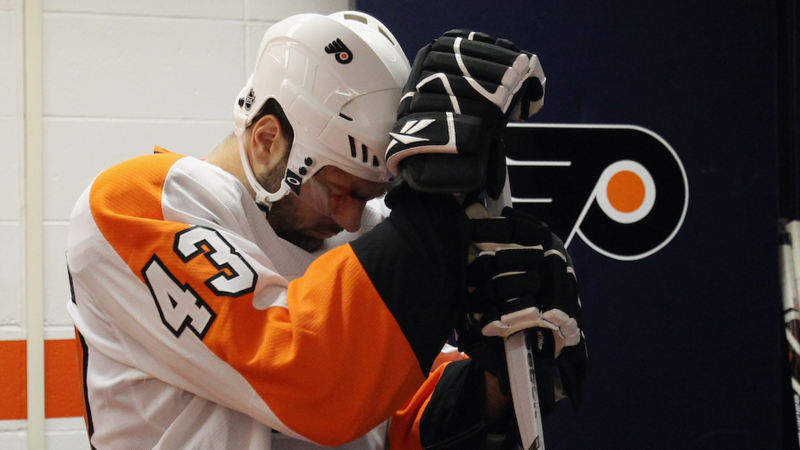 (Image courtesy of Deadspin)
Marc-Andre Bourdon has yet to play a single game this season due to concussion issues that have haunted him for the past 14 months. Fortunately for the young defenseman, he is cleared for contact and will join the Adirondack Phantoms this week.

Bourdon hasn't played a game for the Philadelphia Flyers since the 2012 NHL playoffs and he hasn't taken part in a game since the Phantoms faced the Binghamton Senators on November 30th, 2012. It was on this date he received his second concussion within a year, as his first came with the Flyers. Bourdon's first concussion was unfortunate due to the fact he attempted to play through the injury to remain in the lineup, as he was afraid missing time would cost him his position on Philly's blue line.

In the OHL, Anthony Stolarz is expected to miss a significant amount of time after his leg was gashed with a skate in a game this past week. The London Knights' goaltender was cut by Saginaw Spirit forward Eric Locke. It took 55 stitches to cure his leg laceration, as the Flyers' goaltending prospect is expected to miss four to eight weeks of action.

Stolarz, who was picked 45th overall by the Orange and Black in the 2012 NHL Entry Draft, is 21-4-2 this season with the Knights, who are currently fourth in the OHL's 10-team Western Conference. He is second in the league with a .925 save percentage, fifth with a 2.58 GAA, and fifth with 21 wins.

As for news with forwards, Petr Straka was suspended two games for an altercation with Kyle Beach in the Phantoms' tilt against the Hartford Wolf Pack on Friday. Both players appeared to take part in a scrum, but Straka was the lone player to receive a fighting major for the incident. Due to the suspension from the AHL, Straka missed the Phantoms' 4-1 loss to the Albany Devils on Saturday and 4-1 loss to the Springfield Falcons on Monday.