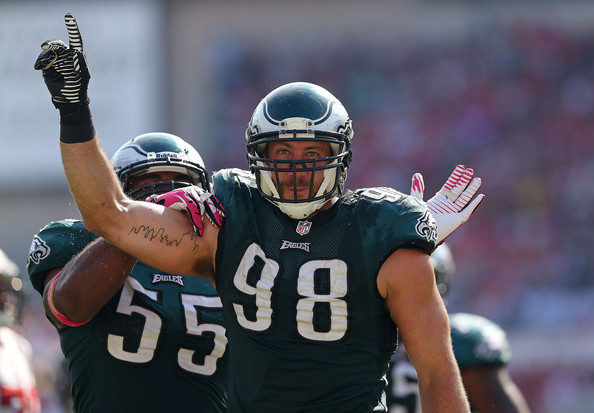 Connor Barwin revealed a glimpse of what NFL life is like in a locker room culture that has been in the limelight all offseason.

Few topics have been more discussed in NFL circles this offseason than the locker room culture of America's favorite pastime.

From Richie Incognito-Jonathan Martin in Miami to what could happen to the team that drafts Michael Sam in May, the curiousity of what goes on behind closed doors has never been higher than it is at this very moment.

Eagles linebacker Connor Barwin gave a peak behind the curtain in a piece he authored for Peter King's Monday Morning Quarterback that outlines the many differences between the traditional office atmosphere and the locker room atmosphere in the NFL.

"Bill Maher has a funny bit in which he says, “Any institution where there’s no women around—like the Church, like football, like the Middle East, like fraternities—things go to s—.” I’d have to say there’s more than a little bit of truth in that joke. The NFL locker room is the ultimate boys club. Yes, we talk about horrendously inappropriate things. Yes, we make fun of each other. And yes, we have a tendency to take pranks a bit too far." Barwin said. "(An Icy-Hot-in-the-helmet incident in 2011 cost one rookie a practice and earned me some time in coach Gary Kubiak’s doghouse.) But at the end of the day, this is not a normal job. Contracts are not guaranteed, career-altering injuries are commonplace, the average career lasts three-and-a-half years."

The Eagles experienced first-hand this season the effects of racial tension among the ranks when Riley Cooper was caught using a racial slur during a Kenny Chesney concert last summer. That incident could have torn apart the team at the seams, but Chip Kelly and the leaders on the roster instead forged a culture of forgiveness and family that helped turn around a squad that finished 12-20in it's previous two seasons.

"The most successful position groups tend to be the ones with the best organization" Barwin explained. "When I was on the Texans the O-line and D-line were led by savvy veterans like Chris Myers and Shaun Cody. From day one of training camp the rules were set in place. Rookies carried veterans’ pads. Rookies stocked the position room with snacks and candy. Rookies embarrassed themselves in training camp skits. Systems of fines were put in place. (For example: $100 for farting during film study cost me a lot of money that year.) Outsiders might view these to be demeaning—imagine a Google employee getting fined for passing gas—but it laid a strict groundwork for how things were to be run. Late for a meeting? That’s a fine. Texting during dinner? A fine. Falling asleep during a film session? Big fine. Everyone is held accountable. Everyone shares the same goal: to win football games.

"It’s no coincidence that those strictly run linemen groups were two of the most close-knit and successful position groups on the team. It sounds like a small thing, but when you can’t remember to turn your phone off in a meeting, maybe you won’t remember whether you’re supposed to drop into coverage on either the second or third receiver on the most important play of the game. When I got to the Eagles last year, I spoke to my former Texans teammate DeMeco Ryans and others about what went wrong with Philly’s disastrous 4-12 campaign in 2012. The team lacked cohesion, guys didn’t care about their teammates, guys were undisciplined. In other words the locker room went wrong. We began to put systems in place. Linebacker dinner every Thursday night became mandatory. Cell phones were put away. We broke bread together, got to know each other outside of football. Trust was earned. We started to form that bond."

Finally, when it comes to Michael Sam, Barwin says that he doesn't expect anything but positivity to welcome him to the league.

"I left Michael Sam out of this article up to this point on purpose," Barwin said. "I hope by now you have a better understanding of the inner workings of an NFL locker room. If Michael Sam can play football, if he proves that he wants to be part of the TEAM, it doesn’t matter who he sleeps with at night. He will not only be accepted in an NFL locker room, he will make it stronger.

"The most effective way to overcome bigotry is through personal relationships. My older brother, Joe, is gay. I think most guys in the NFL know someone or know someone who knows someone who’s gay. But for some guys in this league, Michael Sam will be the first openly gay man they have ever met. He has a great opportunity to change the stereotypes that many in this country associate with homosexuality. Football is a game where people from all walks of life come together for a common cause, and the game has the unique ability to serve as grounds for social progress. (You guys saw “Remember The Titans,” right?) Michael Sam’s biggest challenge won’t be running backs or offensive lineman. It will be the media."