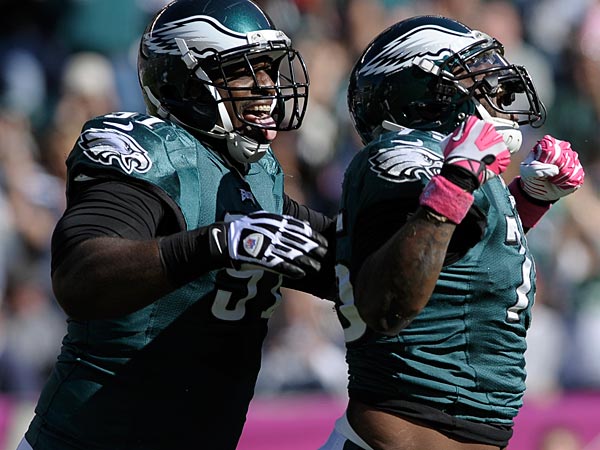 The Eagles have youth on the defensive line, but to be successful, they need to develop more of a pass rush (Image Courtesy Philly.com)

The today’s area to be addressed: Defensive Line.

If there is one thing that could be said about the Eagles defensive line, it is that it oozes potential. Potential would be the key word for the youngest defensive line in the league.

The Birds’ line is led by former first round pick Fletcher Cox, converted from defensive tackle when the Eagles switched to a 3-4 defense. While Cox was slow to adjust to the new scheme following a stellar rookie season in 2012, his play became much more noteworthy once the second year end got comfortable.  Ultimately, the Mississippi State product finished the season with 41 tackles and three sacks.

On the other end is Cedric Thornton. The elder statesman of the line at just 25 years of age, Thornton is now prepared to enter free agency, but as an “exclusive rights” free agent. As such, all the Eagles need to do is offer the Southern Arkansas product a contract and they retain his rights. Holding onto Thornton would be a boon for the Eagles, as he was one of the NFL’s top defensive ends against the run.

Starting at nose tackle for the Eagles was rookie Bennie Logan. Logan, a third-round pick from LSU, stepped in when the Birds traded Isaac Sopoaga to the New England Patriots.  Immediately making an impact early for the Eagles, Logan was often quick to get to the quarterback, but struggled against the run.

What makes the unit a true strength of the team, however, is the depth behind the starters. Vinny Curry led Eagles linemen in sacks with four, despite limited playing time. Undrafted rookie Damion Square came on late in the season at nose tackle, and defensive end Clifton Geathers was a nice surprise, rotating in at end and tackle.

Big names are out there in free agency. There are the veterans, such as Jared Allen, and contract year stars, like Greg Hardy of Carolina. What is important for the Eagles is to identify players who excelled with the 3-4 alignment; otherwise, they will waste their money on fitting a square peg in a round hole.

Below are a list of defensive lineman that could interest the Eagles.

1. Michael Johnson. It appears that the Bengals will allow the mammoth defensive end to test free agency. With six years experience in a 3-4 system, Johnson has registered 26.5 sacks and recorded 202 tackles. Although the Georgia Tech product had a down year in 2013, expect his price tag to be high.

2. Lamaar Houston. The former second-round pick of the Raiders will reach free agency without missing a game his entire career. With 16 career sacks in four seasons, the defensive end is big enough to play both inside and out, as he stands 6’3” and weighs 300 pounds.

3. Paul Soliai. The Eagles are searching for a true 3-4 nose tackle and the former Utah Ute may be the answer. Yes, the Eagles swung and missed on Sopoaga, but they could take another chance on a big defensive tackle of Samoan decent.

Keep an eye on: Randy Starks. The former Maryland Terp played with Soliai last year in Miami and is looking to cash in. The 30-year old is another defensive tackle that could play both inside and out, although he may not be the nose tackle the Eagles are looking for.

Keep an eye on Part II: Terrance Cody. The former second-round pick has battled weight issues for most of his career and is looking for a fresh start. The former Alabama Crimson Tide is just the gap destroyer the Eagles could look for, as he weighs in at 349 pounds.