Eagles Flyers Phillies Sixers About Us Write For Us
Hockey Hilarity: Satire at it's Finest
Connor Barwin Opens Up About Eagles Locker Room Culture 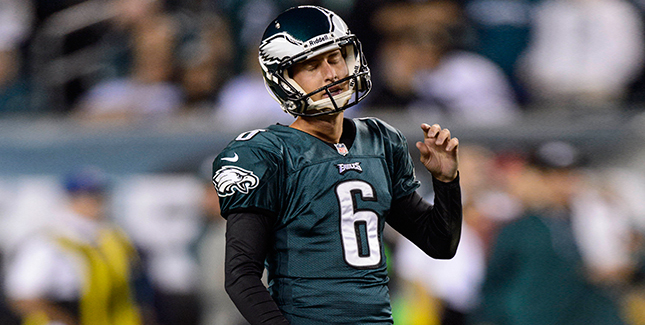 It is expected that Alex Henery will see competition after a subpar 2013 season (Image courtesy CSNPhilly.com)

The today’s area to be addressed: Special Teams.

Of the Eagles specialty players, one is certain to return, one is a free agent, and the other can expect competition. Let’s sort out the easiest one first.

Jon Dorenbos is amongst the best in the league at what he does. Dorenbos enters his eight year with the Eagles as their long snapper. It has been a rare occurrence that the Magician has a bad snap. He continues to be a vital part to the success of the Eagles special teams and at 33 years old, can expect to remain an Eagle for the foreseeable future.

Punter Donnie Jones was perhaps the Eagles best free agent acquisition in 2013. The 10-year veteran signed a one year deal with the Eagles and during his stint, he averaged 44.9 yards per punt, which included a long of 70 yards. Although the LSU product is a free agent, he will be a high priority to re-sign.

Kicker Alex Henery could be in serious trouble to continue as the kicker for the Philadelphia Eagles. The former fourth round pick struggled in his third season with the Birds, as he connected on just 82 percent of his field goals. What was more troubling was the former Cornhuskers inability to kick the ball deep forcing opposing teams into touchbacks.

The Eagles will be looking to improve their special teams, and the biggest way to do that is to employ a kicker who can consistently kick the ball deep. To improve, the Eagles could be looking to upgrade the kicking position if Henery does not improve in the offseason.

There will be a number of kickers available in the 2014 NFL draft, but if the Birds decide not to draft one, free agency will provide adequate replacements.

Below is a list of kickers who may fit the Eagles need as they search for more consistency both on field goals and touchbacks.

1. Dan Carpenter. The kicker had trouble finding a job after being released by the Dolphins early in training camp. Once the former Dolphin joined the Buffalo Bills, he connected on 91.7 percent of his field goals, including 5-7 from 50 yards or beyond.

2. Nick Folk. The former Dallas Cowboy struggled to find consistency until this last season with New York Jets. Folk has been a member of the Jets for the last four seasons and reached a career kick success rate of 91.7 percent, including 3-3 from 50 yards and beyond.

Keep an eye on: The NFL draft and undrafted NFL rookies.