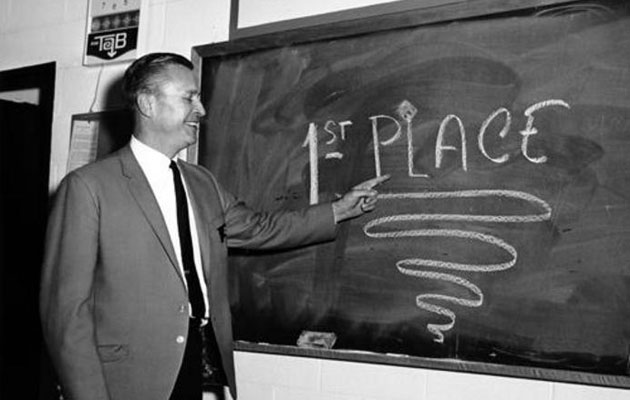 Keith Allen, who passed away on Tuesday at age 90, served as the architect of the two-time Stanley Cup champion Flyers teams in the 1970s. (Photo Courtesy of CBSSports.com)

At the epicenter of the Philadelphia Flyers franchise was the first head coach and one of the earliest faces of the franchise, synonymous with Ed Snider, Gene Hart, Bernie Parent and Bobby Clarke. But Keith Allen will be remembered more for his contributions off the ice – as the general manager – rather than on the bench.

Allen passed away on Tuesday at age 90. He will always be remembered as the architect of the Broad Street Bullies, the team that went on to win back-to-back Stanley Cups in 1973-74 and 1974-75.

When the Flyers dawned as one of the expansion teams in 1967, Allen served as the first head coach and had an integral part in the team's construction from the start. Two years later, he was the general manager. He drafted Bill Clement, Bob Kelly, Bill Barber and Jimmy Watson. He made trades that brought in players like Reggie Leach, Barry Ashbee and re-acquired an original draft pick of the Flyers, Bernie Parent. He also hired the head coach that put the Flyers over the top, putting Fred Shero on the bench.

That was the basis of the two Stanley Cup champion teams. Allen served as general manager until 1983. Some of his other moves included drafting the likes of Brian Propp, Pelle Lindbergh and Ron Hextall. He signed Tim Kerr and Dave Poulin as free agents. He also traded for Mark Howe.

A series of rememberences poured in following the announcement of Allen's passing. The Flyers released the following statement:

"Keith was the first coach in the history of the Philadelphia Flyers and a man for whom I have tremendous respect," Snider said. "In my mind, he was and always will be one of the greatest General Managers in the history of hockey. He was known as 'Keith the Thief,' I never knew of a bad deal he made. This team would never have reached the level of success we have had over the past 48 years if it were not for Keith.

"Over the years he became one of my closest confidants and one of my best friends. I will never forget all of the many memories we shared together. I would like to extend my condolences to Keith's family, his wife Joyce, their sons, Brad and Blake, and their daughter, Traci, and their four grandchildren, Chelsea, Shay, Jillian, and Chase. He will sorely be missed by all of us."

Snider continued to talk about Allen following Thursday night's 3-1 win over the Colorado Avalanche. Allen was honored with a moment of silence and video tribute before the game and the Flyers pulled out "God Bless America," the anthem of the Broad Street Bullies, as part of the pre-game ceremonies.

"Keith was a dear friend," Snider said. "I'm just awfully sorry about how his life ended. He went through some tough times over the last several years. But I think he's in a better place and he was a great friend and a great guy.

"He was this organization. He was the guy that hired Fred Shero, he was the guy that drafted the players that won the Cups for us. He is in the Hall of Fame but despite that fact I think he has not gotten the accolades he deserves. I never remember a trade he made that was a bad trade. The guy was sensational. He was a nice guy. He did what he had to do in the right way. I can't say enough about him."

"Keith was one of those men who you very rarely come across who was fatherly and grandfatherly to all of us players and our families and yet was tough enough and strong enough to do the things that were necessary for us to win the Stanley Cup," Clarke said. "Every player who ever played here under his leadership liked Keith. Anyone was traded liked Keith. He may have been the only man in hockey who everybody liked. He didn’t have a person who disliked him in the world."

In honor of Keith Allen's legacy with the Flyers, we are sharing a pair of videos below. The first is the tribute the Flyers played at Thursday's game. The second is a video of Allen taking part in the ceremonies from the final game at the Spectrum in 1995.