Who Will Be LeSean McCoy’s Primary Backup? 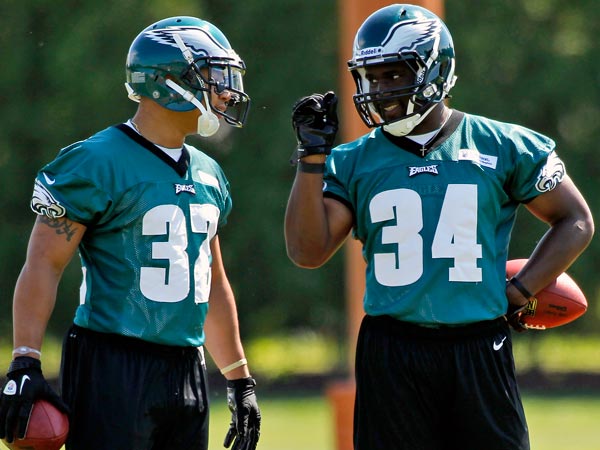 Chirs Polk and Bryce Brown are in for a long battle to see who will backup All-Pro LeSean McCoy (Image Courtesy of Philly.com).

Chris Polk and Bryce Brown are in for an interesting offseason.

The need to give star running back LeSean McCoy more rest is imperative.  McCoy was not just the NFL’s leading rusher, but he also led the league in attempts with 314, while playing 890 snaps.

Why are those number so important? Because generally, a running back that leads the league in rushing attempts tends to follow up the effort with a statistically down year.

In 2012, Houston Texans running back Arian Foster led the league with 351 carries. This past year, he played in eight games and registered just 121 carries.  In 2011, Maurice Jones-Drew of the Jaguars carried the ball 343 times, or 42 more carries than the next closest player. The following year, Jones-Drew was befell by injuries and played in six games with just 86 carries.

The trend here is that the more carries (and hits) a player receives, the greater the toll the player suffers the following season.  As such, it would be prudent for the Eagles to not only plan to reduce Shady’s workload, but also to have a proven and reliable back up in place.  Fortunately for the birds, there appear to be two talented backs battle the backup roll behind McCoy.

In one corner, we have Polk, the 2012 undrafted running back from the University of Washington. Polk, who went undrafted due to injury concerns, had a strong sophomore season after admittedly being out of shape.

The Washington alumnus lost a reported 20 pounds between his first and second season to add quickness to his strength. He finished the season with just eleven carries for 98 yards for a robust 8.9 yards per carry. Polk also ran for three touchdowns and added four receptions for 61 yards.

In the other corner stands Bryce Brown. Drafted in the seventh round of the 2012 draft, Brown had a breakout rookie season due to injuries that hampered McCoy.  Expectations loomed large for Brown in his sophomore campaign, but he fell short. The former Kansas State running back was hesitant to run inside throughout the season, and that resulted in increased carries for McCoy.

All in, Brown carried the ball just 75 times, averaging 4.2 yards per carry, although even that number is skewed, as Sheil Kapadia of Birds 24/7 blog (courtesy of STATS, Inc.) notes that Brown averaged just 3.4 yards per carry after excluding his 65-yard run versus the Chicago Bears.

Both running backs possess very different skill sets, and have the ability to be successful in the NFL.  Yet both have similar measurables, however it is Brown who possesses the breakaway speed.  Perhaps that is why he continually tried to bounce the majority of his runs to the outside.  Polk, who stands 5’11”, but weighs 222 pounds, used his compact frame to run for five first downs in his limited action. With surprising speed and straight-ahead power running, the Eagles could be more inclined to use the undrafted back as McCoy’s primary back up in 2014.