Eagles Flyers Phillies Sixers About Us Write For Us
Rollins Makes It To Texas, Sets Milestone
Game Preview: Sixers enter game not on historic losing streak 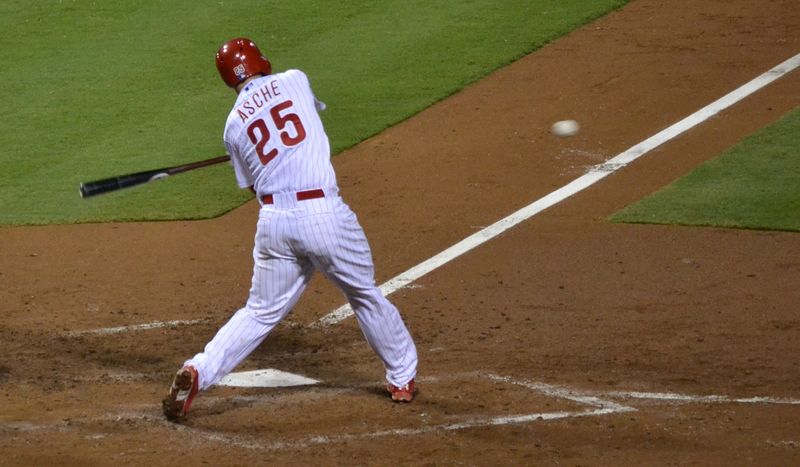 It cannot be overstated how glorious this day is. Whether your team is a contender or not, everyone starts tied for first place on Opening Day, and the excitement is at the highest of levels. Baseball fans around the world call out sick from work (or manage to get out early, in my case) to get a taste of their club hitting the field for the first time. As the dust of the pregame ceremonies finally settled, it was Tanner Scheppers making his starting debut for the Texas Rangers. Cliff Lee returned to his home from the conclusion of the 2010 season to lead the Phillies. After being held scoreless in their final three Spring Training contests, how would the team respond to the young hurler?

The Game: Neither team made much noise in the first frame of the 2014 campaign, with the Phillies going down on just 9 pitches. They would, however, open things up in a major way in the second inning. Ryan Howard led things off with a full count walk. Marlon Byrd and Domonic Brown would each record outs, making the chance of scoring look far off. However, with Howard having been moved up to second, and a two out walk to Carlos Ruiz, Cody Asche fought a ball off down the left field line for a double that brought home the season's first run. A walk by Tony Gwynn Jr. allowed Ben Revere to come to the plate with the bases loaded and single home Asche. Jimmy Rollins then had a chance with the bases loaded, and made the absolute most of it. J-Roll shot a ball into the jetstream in right field that would go down as not only a grand slam, but the 200th homerun of Rollins' career. When all was said and done, the Phillies were able to bat around open the score to 6-0.

Cliff Lee, normally known for his ability to shut down the opponent, could not do so in the bottom of the same inning. Adrian Beltre batted a double into left field with two strikes on him. Alex Rios was able to beat out a ground ball to Rollins at short, and a walk to J.P. Arencibia after a Mitch Moreland fly out loaded the bases with one away. Each runner was able to move up a base when Leonys Martin singled into right field. After a visit to the mound, Cliff Lee then surrendered a bases-clearing double to Josh Wilson that advanced the score to 6-4. Lee did retire the next two hitters to complete the inning.

In the top of the third, the Phillies were able to get runners on both second and third with nobody out, but failed to bring either player home. That came back to haunt the team in the bottom half of said inning. Prince Fielder and Adrian Beltre each singled off of Lee to set up Alex Rios. Rios would eventually crush a ball into the left field seats for a three-run homerun that gave Texas the 7-6 lead. The next three batters would be set down in order, but the Rangers had their first lead of the afternoon.

With one away in the fourth inning, Ben Revere singled, then stole second base during the next at bat. Then with two outs, a base hit from Chase Utley let Revere round third and score to tie things back at 7 a side. They'd manage to score two more in the fifth inning, after a base hit by Chooch and a walk to Asche. John Mayberry Jr. would pinch hit for Tony Gwynn, doubling into center field and bringing in both runners. a 9-7 lead for Philadelphia. Lee continued to pitch into the fifth frame, allowing a double to Arencibia and a single to Martin that closed the gap to 9-8.

Scores would be recorded in the sixth inning as well. Utley grounded out, while Howard struck out to start that frame. Marlon Byrd then homered to put the Phillies into double digit scoring. A single by Brown and a walk to Ruiz gave Asche another opportunity to come up big. He rolled a ball over to Elvis Andrus at short that should have been the final out, but a botched play allowed Brown to score and Ruiz to advance. Mayberry followed with a walk that loaded the bases for Revere, who promptly singled to score Ruiz for the Phillies' fourth and final run of the inning, good for a 13-8 score.

Jake Diekman had pitched the sixth for Philly and came out for the seventh. But, after giving up a walk to Beltre and a single to Rios, he was replaced by B.J. Rosenberg. Michael Choice singled off Rosenberg to load the bases with nobody out. Fortunately, Arencibia then grounded a ball to Rollins that turned into a double play. A run did score though, and wasn't the last one. Martin would walk to put runners at the corners. Jim Aducci then pinch hit and singled to score Rios, making it 13-10. A walk to Shin Soo Choo loaded the bags, but a ground ball to Utley off Andrus' bat led to a force out and the end of the inning.

A solo home run hugging the right field line by Cody Asche bumped the tally to 14-10. Jonathan Papelbon would then be called upon in the ninth to finish the game, and was able to quickly close things out and gave the Phillies win number one on Opening Day.

Impact: Well, the season has started with an unexpected, but welcomed, bang. 14 runs and 17 hits are much more than anyone would have predicted for such a sluggish offense. Ben Revere, Chase Utley, Ryan Howard, Marlon Byrd, and Cody Asche combined for 13 of the team's hits, with homeruns recorded by Rollins, Byrd, and Asche. With all of the superb offense we saw, it's easy to forget about some pitching struggles. Cliff Lee gave up eight runs for just the fourth time in his career, so it is not of major concern. Jake Diekman had a respectable outing, while B.J. Rosenberg and Antonio Bastardo looked shaky. It is the first game of the season, however, and nobody can panic just yet.

Up Next: Tomorrow night will be the first night game of the 2014 season. Making his regular season debut for Philadelphia will be A.J. Burnett, and he will take the mound against Texas' Martin Perez at 8:05 in Arlington, Texas.