Roseman, Birds Should Be Cautious In Free Agent Approach 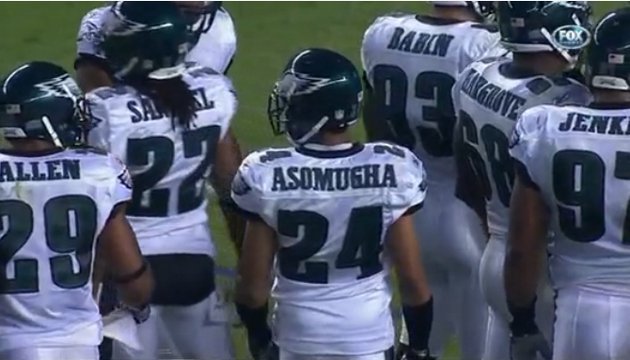 The Eagles spent laviously in 2011, they should take a different approach this time around (Image Courtesy SportsGrid.com)

The story of the 2011 Philadelphia Eagles “Dream Team” has already been written and documented. But just in case you have forgotten, the Eagles went on a spending spree following the end of the lockout and signed a crew of mercenaries led by Jason Babin, Nnamdi Asomugha and Vince Young, while trading for Dominique Rodgers-Cromartie. Only one player from that infamous year remains, and that is All-Pro guard Evan Mathis.

With free agency set to begin at 4 pm on Tuesday, March 11th, the Eagles must show restraint once the market opens. Of course it will be tempting to lure big name targets such as defensive end Jared Allen or safeties Jairus Byrd and T.J. Ward to Philadelphia, but the Eagles must follow the blueprint that general manager Howie Roseman has created and build the team from within.

Since Roseman took over as general manager of the Eagles, the Birds have locked up DeSean Jackson, Riley Cooper, LeSean McCoy, Jason Peters, Evan Mathis, Jason Kelce, and Trent Cole. Roseman has identified players who he beliefs are the core members of the team and soon he will look to lock up members of his vaunted 2012 draft class. If Philadelphia wants to take the “next step,” it is imperative that the team builds from within and adds talent through the draft.

The Eagles blueprint is a good one. Build through the draft and sign your own players. Last seasons Super Bowl participants followed the same blue print, but with one little rub: adding mid-level free agents to cap friendly, short-term deals. Roseman has said on numerous occasions that the Birds will be “careful” in free agency. Now being careful is much different than not spending. It is fully expected that the Eagles will sign free agents, albeit midlevel free agents. So fans wishing of a Byrd-Ward safety tandem should not get their hopes up.

The Eagles have roughly $24.1 million in cap room according to EaglesCap.com. With that much accessible money, the Birds have positioned themselves to build for the present and the future. Although the Eagles are poised to make a splash in free agency, they should not. In another year, the 2012 draft class, featuring Fletcher Cox, Mychal Kendricks, Nick Foles, and Brandon Boykin will all be up for lengthy and expensive extensions. It is better to spend wisely now to keep your core intact later.

The Eagles are at the doorstep of greatness. With the right acquisitions in free agency, they can kick the door wide open and announce themselves as perennial Super Bowl contenders. All the Birds have to do though is remember that infamous spending spree of 2011 and make the right choices in free agency. If the Eagles follow Roseman’s blueprint, then the nightmare of the “Dream Team,” will just become a faded memory.