What The Franchise And Transition Tags Mean For The Eagles 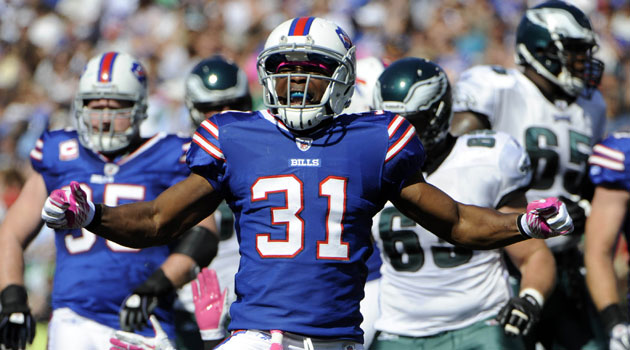 Could Jairus Byrd be heading to Philadelphia? The safety was not tagged on Monday (Image Courtesy of CBSSports.com)

One day after “tag day,” and everything is coming up Milhouse. For the Eagles, they have to be ecstatic to see who was not given the franchise or transition tags. Heading into free agency, the Birds have an opportunity to do some damage in the free agent market, as they have 21 million dollars in cap room, according to EaglesCap.com.

Before jumping into who the Eagles may or may not target as unrestricted free agents, let’s break down which players the Birds could have been interested in that were tagged. When a player is designated as a “franchise player,” they receive a contract that is equal to the average of the top five salaries at a player’s specific position. Now it should be noted that just because a player receives a franchise tag, it does not mean that he cannot sign with another team, although it is a rare occurrence in today’s NFL.

Starting with players who were franchised by their own teams, the list starts first and foremost with Washington linebacker Brian Orakpo.

Word out of Washington was that they were very conflicted as to whether or not to franchise the former Texas Longhorn. But coming off a strong season and having few homegrown star players, Washington had little choice.

Another player who could have been of interest to the Eagles was defensive end Greg Hardy of the Carolina Panthers. Over the last two seasons, he led Carolina with 26 sacks. Although he is a 4-3 defensive end, he could have been a target for the Birds. Hardy has already reportedly signed his franchise tender and will remain in Carolina next season.

Looking at special teams, it should be noted that the New York Jets felt it important to hold on to kicker Nick Folk after he had a career year. The kicker, had he reached free agency, would have been a hot commodity after connecting on 91.7 percent of his field goals last season.

The franchise tag is not the only tag that will impede the Eagles from improving their team, as the transition tag will do a similar job. For teams that want to keep their own players, but at a lower cost than the franchise tender, those teams will give out the transition tag. The transition tag allows a team to keep control of a player and match any offer that the player receives, except that the value is of the average of the top ten players at a given position as opposed to top five, thereby lowering the cost of the tag.

Jason Worilds of the Pittsburgh Steelers was the only player of note who was given the transition tag that could have had value to the Eagles. Worilds is an outside linebacker coming off a season where he recorded eight sacks in limited action. He would have received significant interests from teams that employ a 3-4 defense.

The four players above were all players that the Eagles could have (or should have) had interest in. Although those players will no longer be in play for the Birds, the players who did not receive a tag should make the Eagles front office giddy. The excitement starts at safety, the biggest position of need, where Matt Lombardo touched on that this morning. The Eagles will almost certainly make a play for either Jairus Byrd or T.J. Ward.

Besides the safeties, the Eagles will sniff around the cornerback market, where both Sam Shields and Alterruan Verner will reach free agency. Verner has already said that the Titans will not receive a “hometown discount.” Both Shields and Verner were profiled in our free agent cornerback preview.

Stepping away from the secondary, the Eagles could look to target Washington linebacker Perry Riley. Although Riley does not provide the pass rush the team is looking for, he can play all three linebacker positions and is adept in both run and pass defense.

The final piece of the free agent puzzle could come from the Super Bowl champion Seattle Seahawks. The Seahawks decided not to tag kicker Steven Hauschka, and after three years in Seattle, he could be looking for a new home. Hauschka connected on 94.3 percent of his field goals last season, and if signed, would spell the end of incumbent kicker Alex Henery. While Hauschka is the best kicker on the market, the Eagles could also have interest in Dan Carpenter or Jay Feely.

So with the franchise and transition tags now in place, the Eagles will develop their game plan. With star players like Byrd, Ward, and Verner amongst others hitting the market, the Eagles will be in a position to improve their team and take the next step towards a championship.