Free Agent Profile: LeBron to Philly?? Not as Crazy as it Sounds 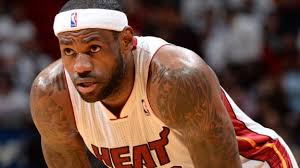 As the NBA Playoffs near the end of an exciting first round, the Sixers are looking forward to a summer that will define this team for many years to come. Free Agency will definitely play a tremendous role in this year’s offseason plans for the team. They have over 30 million dollars to spend, which means they have multiple options. Should they try and lure a star to Philly or bring in a few quality role players and hope they mesh well with some rookies? That answer is in the hands of GM Sam Hinkie. So far Hinkie has impressed people around the league with his decision making but this summer will serve as a major test to his abilities. The Sixers future rides on Hinkie’s decisions in the coming months. Who could Hinkie land in Free Agency that would boost this team to the Playoffs?

Let’s start off the Free Agent Profiles with Miami Heat forward, LeBron James. Yes, “The King.” Now you’re probably thinking I’m crazy but don’t click the red X in the top-right corner of this page just yet. I’m not here to get anyone’s hopes up because the odds are obviously not in our favor but it’s not as crazy as it may sound. Could “The King” actually wind up in Philly next year? The two-time NBA Champion has a player option for the 2014-2015 season and could opt out to test the Free Agency Market. Where would he decide to take his time and talents this time around? That’s the big question.

First, if for some reason he does decide to opt out of his contact, what teams will make a run for LeBron? If he were to use the same criteria he did when making his decision in 2010, the Sixers have to be on his list. He has shown he has no problem interviewing with teams coming off bad seasons, because four of the five teams he met with in 2010 were coming off losing seasons, including the Nets who had 12 wins the previous year. So just because the Sixers were terrible this year wouldn’t hurt any chances at James.

What else do Stars all seem to want these days? Money and major markets are keys to become an attractive destination. The Sixers have one of the highest cap-space in the league with just over 30 million dollars available to potentially lure James to Philly, so money isn’t a problem. Major market, Philadelphia is top-five in the country so that won’t be a problem.

Still reading? Anyone starting to feel like this isn’t so crazy?

Next, the Sixers have one of the brightest futures in the NBA. With the possibilities they have coming up in this June’s draft, they have the opportunity to become a real legit threat in the Eastern Conference real quick. Michael Carter-Williams looks like he is going to develop into an All-Star caliber point guard. Nerlens Noel we have yet to see, but we know that he was a dominant defensive blocking specialist in college who needs some work to grow into a premier center in the association but he shows promise. Put those two pieces together with two potentially top-10 picks in June, this team can do some damage in the East next year even without a star. But the young talent and the bright future can become a big incentive for LeBron. If he wants a team that will be in the playoffs throughout the remainder of his career Philly isn’t a bad choice.

Finally, if you look around the league for other teams that could go after LeBron, there’s not many. If he were to leave Miami, then the Cavaliers and the Lakers become the other options besides Philadelphia in my opinion. With the Lakers though, I can’t see anyway Kobe leaves which would immediately cut them from the list. With the Cavaliers, does he really want to go back to Cleveland, his hometown city that he betrayed a few years ago? And he doesn’t get along with their GM so that could cause some issues. There have been mild talks of some other teams like Dallas and Sacramento but I don’t see them as being legit threats to land James. What some people don’t know is there is virtually no shot of New York or Chicago being in the mix simple because they wouldn’t have enough money available unless they did a complete roster overhaul which is very unlikely. So that leaves our own Philadelphia Sixers as a team that could make a run at James.

The bottom line is the Sixers have way too much money and way too many assets for LeBron to not at least interview with them. Hinkie has shown that he has a plan for this team and that his plan is already in progress. If he manages to get “The King” in an interview, who knows what could happen. Like I said earlier, the odds aren’t in our favor and it’s hard to imagine LeBron leaving Miami but if he does then LeBron James taking his time and talents to South Broad St sounds incredibly awesome.