Eagles Flyers Phillies Sixers About Us Write For Us
Lindros, LeClair, Desjardins to be inducted into Flyers Hall of Fame
Phillies Pound Out 17 Hits In Series Opening Win Vs. Nats 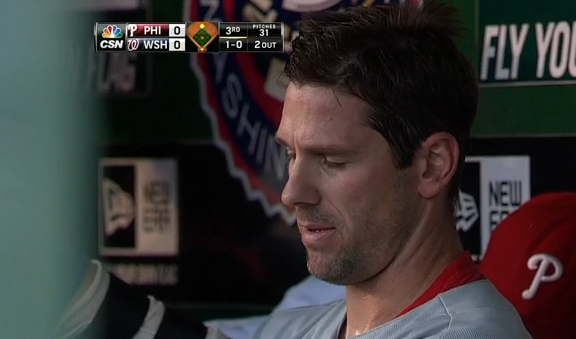 Cliff Lee looked completely defeated.  With two outs in the third inning, Cliff Lee threw a pitch wide for a ball.   That would be all he would pitch.  Soliciting compassion from batter Denard Span, Lee just knew he could not throw another pitch.   Lee's elbow was injured once again.

Instead of heading for the locker room with trainer Scott Sheridan, Lee took a seat on the Phillies' bench.   Looking at the picture above, Lee just seems to know his season is over.   He did not try to throw another pitch, he did not even immediately seek a diagnosis.   Sad.

Meanwhile, at AAA Lehigh Valley, starting pitcher David Buchanan, who previously filled in for Lee, had the start.   Buchanan was strong tonight for the Iron Pigs, going 7 2/3 innings, allowing just one run.  Buchanan would be perfectly lined up to take Lee's next scheduled start, which would have been Tuesday or Wednesday of next week against the Astros.