Eagles Flyers Phillies Sixers About Us Write For Us
For Phillies' Ruben Amaro, Jr., Passing On Yasmany Tomas Is The Bigger Risk
MCW, KJ shine, but Sixers lose again

It was a new day with old results for the Flyers at Madison Square Garden on Saturday afternoon.

It all looked too familiar early on, with Claude Giroux picking up a double-minor for high-sticking just one minute into the game.

A few failed clears by the penalty killing unit lead to great puck movement by the Rangers, and eventually a puck in the back of the net off of the stick of Derrick Brassard to give New York the early 1-0 lead.

The Flyers killed off the second half of the double minor, but couldn’t change the momentum as they were still being severely outplayed at even strength.

After a good zone entry by the Flyers top line, Brayden Schenn and Jakub Voracek found Nicklas Grossman who sniped a wrist shot above Henrik Lundqvist’s blocker and off the bar to tie the game at 1.

That was Grossmann’s second goal of the year after scoring just 2 goals in his previous 182 games (4 seasons).

The Flyers were again called for high-sticking late in the period, this time Grossmann picked up the 2 minute minor.

The Flyers were definitely outplayed at even strength in the first period, only accounting for one-third of the total shot attempts in the period.

They managed to kill off Grossmann’s penalty and then received a power play of their own early in the second period.

After an ugly first minute of the power play, Wayne Simmonds and Mark Streit combined to keep the puck in the zone before Giroux made a great pass to Schenn, who made an even better pass to Voracek who deposited it in the back of the net to give the Flyers the 2-1 lead.

That lead was short-lived however, as Jesper Fast ripped one past Ray Emery to tie the game less than 3 minutes later.

That was all the scoring for the second period, despite some great chances for the Rangers. Emery really stood on his head during the majority of the latter stages of the period.

After picking up 10 shot attempts at even strength in the first and allowing 20, the Flyers followed that up with just 8 shot attempts in the second while allowing 20 again. This put them at just a 31% corsi for through 2 periods.

After 2 periods the 4th line had played less than 5 minutes, allowing a goal against in that short timeframe.

The Flyers top two lines lead the way possession-wise through 2 periods, along with Luke Schenn and Michael Del Zotto on the blue line.

The optimism for the Flyers evaporated quickly as Brassard finished a 3-on-2 to make it a 3-2 game after a wide shot by Giroux lead the Rangers the other way.

The Flyers couldn’t capitalize on a few chances in the next few minutes, and J.T. Miller skated around Mark Streit and the net to score a wraparound goal on Emery with just over 10 minutes to go in the game.

Now down two, the Flyers played the final 10 minutes of the game in a dejected manner despite some offensive zone time.

They eventually gave up an empty netter with Emery pulled to end the game with a final score of 5 to 2. 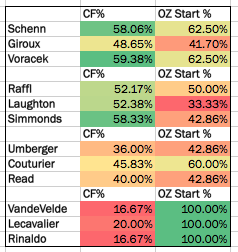 The Flyers top two lines played well as usual, but the 4th line left something to be desired. It would be nice to see Couturier and Read get a different linemate to see if that can change things up and drop Umberger to the 4th line.

Tough game for Streit and Grossmann, even with his goal. Luke Schenn proved today why he deserves to be in the lineup. 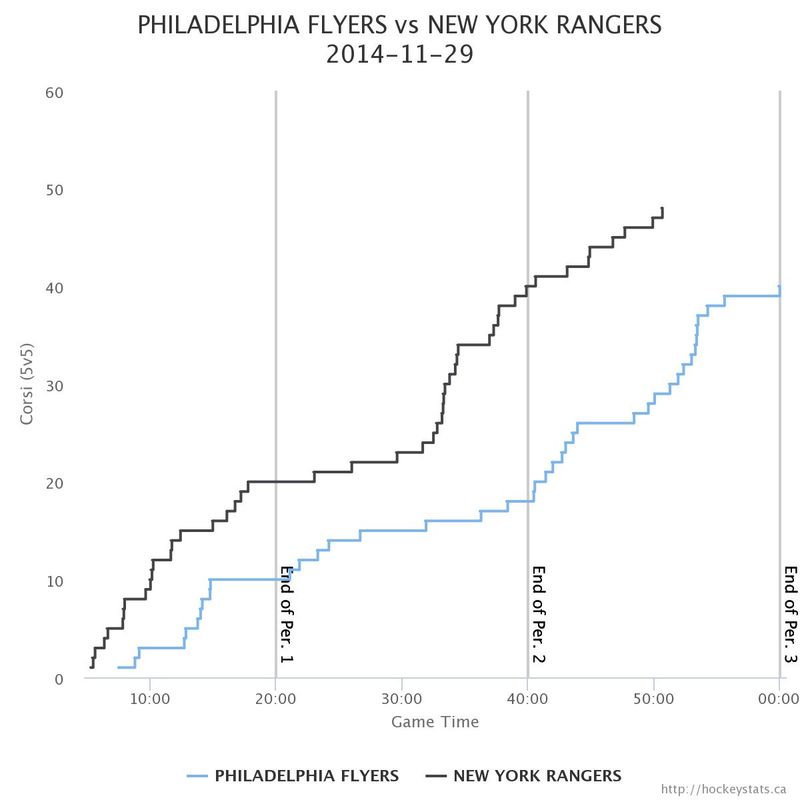 The Flyers will now hit the west coast for a few games starting Tuesday in San Jose.

Ryan Gilbert is a contribtuting writer for Flyedelphia and can be found on Twitter @RiskyBryzness.