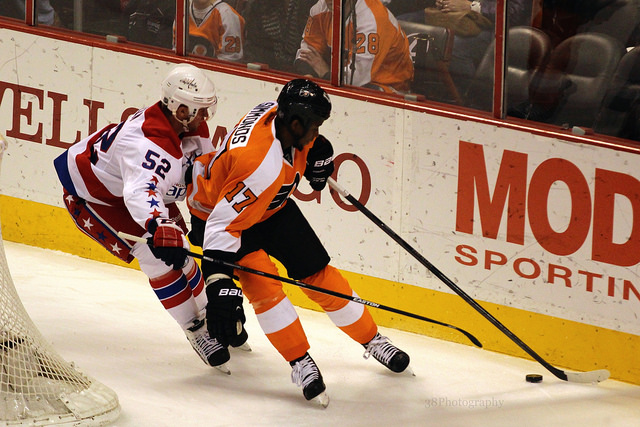 Photo courtesy of Amy Irvin/38Photography
After opening the current homestand with an emotional win, their first in a shootout in over a year, the Flyers were dealt another injury scare. Lucky for them, it turned out to be nothing.
Steve Mason had an MRI on Wednesday, but will get the start in goal for the Flyers as they host the Washington Capitals at the official halfway point of the season on Thursday night at Wells Fargo Center.
Mason was the Flyers star in a 2-1 shootout win over the Ottawa Senators on Tuesday. He is 7-12-6 this season with a 2.50 GAA and .919 save percentage.
Wayne Simmonds was the Flyers other star, scoring the game-tying goal in regulation and getting the deciding goal in overtime. Simmonds leads the Flyers with 16 goals and has 26 points, tied for third on the team.
The Flyers still operate around Claude Giroux and Jake Voracek. Voracek is still the NHL's leader in points with 48, though he has just two points in his last six games.
Giroux is still battling the injury he suffered on Friday. Despite missing a game, he still sits sixth in the NHL in points and added an assist to his total on Tuesday in his return to the lineup.
Andrew MacDonald will be a healthy scratch as Luke Schenn returns to the lineup. Schenn's only game in the past week was Saturday against the Devils, where he was one of seven defensemen for the Flyers.
The Capitals come in as the team setting the pace for the third spot in the Metropolitan Division. The Capitals are 21-11-7 on the season with 49 points.
Washington has won three straight games including the Winter Classic. Troy Brouwer scored in the closing seconds to give the Capitals the win over the Blackhawks on New Year's Day.
Two of the hottest players for the Captials are Eric Fehr and Alex Ovechkin. Fehr is on a five-game points streak with six goals and two assists in that time. Ovechkin has seven points over a four-game points streak, including four goals.
While Ovechkin leads the team with 20 goals, it is Nicklas Backstrom that leads the team in points with 39, including a team-leading 27 assists.
Marcus Johansson is another scoring threat with an even 12 goals and 12 assists on the season.
Defensively, the Capitals are led by John Carlson and Mike Green. Both are strong offensive defensemen. Carlson ranks third on the Capitals with 30 points, including 26 assists. Green has 21 points, including 17 assists. Matt Niskanen and Brooks Orpik serve as the Capitals strong defensive players.
In goal, Braden Holtby will get the start for the Capitals. Holtby would be playing in his 23rd consecutive game, setting a new club record, despite starting on Wednesday night in Toronto. Holtby is 19-8-6 with a 2.29 GAA and .921 save percentage.
Game Notes