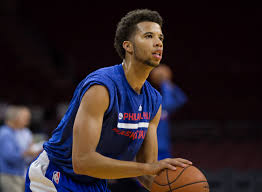 Coming into tonight the Sixers were fresh off a win against the recently hot Detroit Pistons. I'm not sure if anybody predicted a Sixers win, let alone a win by 20. Minnesota came into WFC with an 8-37 record making them one win behind the Sixers. After what was a true back and forth game for the most part, the Sixers pulled away towards the end and got win number 10 on the year beating Minnesota 103-94.

Michael Carter-Williams played his heart out, coming up with his 5th career triple-double to the tune of 17 points,10 rebounds and 10 assists. That stat right there is impressive for anyone, and all the more impressive when you’re only midway through your second year. The offense started with him tonight as he facilitated scoring opportunities for all of the players around him including none other than Nerlens Noel. Whether it was driving to the rim hard and kicking it out to the wing for an open three or finding Noel lurking near the rim, MCW was indeed the spark that the Sixers used to get it done tonight. MCW also showed he could score in a hurry when he received an inbounds pass at halfcourt with seconds left, split two defenders, dribbled past another and laid the ball into the hoop all before the buzzer sounded. It was all around one of the best performances to date for the young point guard from Syracuse.

Nerlens also made his presence felt by racking up a career high 6 blocks. Not only was he making moves on the defensive end, but he also was finishing off possessions with many baskets near the rim often in the form of dunks. He finished the night off with 14 points, 6 rebounds and 6 blocks. Luc Mbah a Moute led the way with 18 points and Robert Covington was right behind him with 14. K.J. McDaniels came off the bench to score 11 points as well.

It was awesome to see the youngsters finish off the game in the fourth quarter after being on a see-saw the entire time with the T’Wolves. This has probably been the biggest issue in terms of winning and losing for the team this year. The ability of a young team to finish off and put games away is a crucial part to the future success of the team. Its also a little crazy to see double digit wins already. We still have a little while to go before the end of the season so Hinkie might have to start making sure that win column is more to his liking come the season’s end.

The Sixers get right back at it tomorrow as they play the eastern conference leading Hawks at WFC. Tip-off is set for 7:30.