Eagles Flyers Phillies Sixers About Us Write For Us
Trio of Phillies Prospects Included in MLB.com Top 100
Flyers down Toronto for fourth straight win 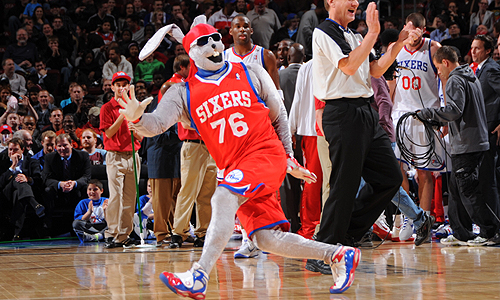 It has been quite sometime since we have seen a team mascot roaming around Sixers games. Hip Hop has been gone since 2011 and it finally looks like the Sixers are prepared to reveal their new mascot. According to the press release on Sixers.com, the unveiling will happen at the Franklin Institute on Tuesday, February 10th at 1pm.

“From the start, our mantra for choosing a new mascot has been ‘For Kids, By Kids,’ and they have been integral to this entire process,” said Sixers Chief Marketing & Innovation Officer Tim McDermott. “We met with, interviewed and listened to more than 1,000 children in the greater Philadelphia region through focus groups and surveys to bring to life the mascot they wanted. We look forward to introducing the newest member of our team to the public on February 10."

The public ceremony will be co-hosted by Sixers CEO Scott O’Neil and In-Arena Host Christian Crosby, who will welcome the new mascot along with hundreds of area children, the Sixers Dancers and Sixers Phlight Squad.

During last night's game against Minnesota, the Sixers released a teaser of the new character and he may resemble their old mascot, Big Shot, who has been an after thought since 1996.