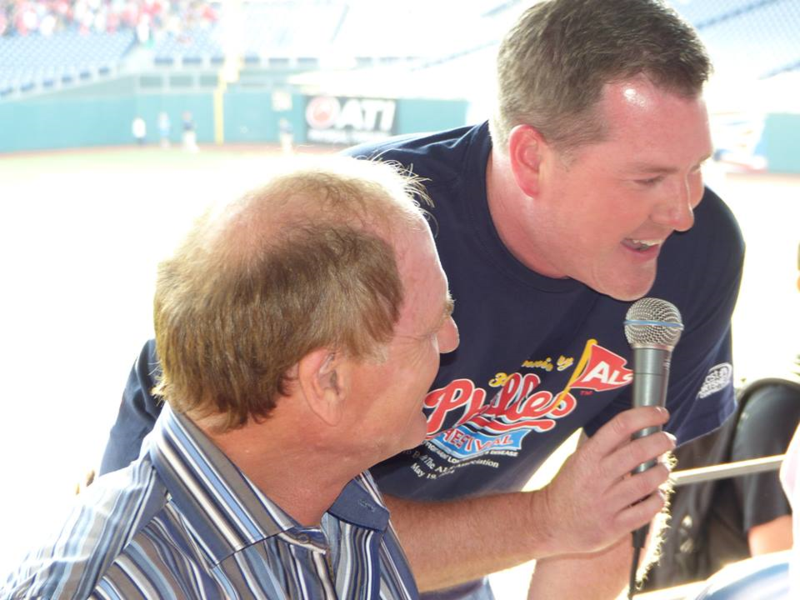 Saturday morning, Phillies' broadcaster Gregg Murphy joined 97.5 The Fanatics' Jon and Sean Show to talk about the current state of the team, how he likes being a part of the broadcast team, and when we can expect to see some games on television this Spring Training.

Murphy, in response to introduction from Jon and Sean:

"The pitching looks like it could hold up. You look at that rotation and the back of the bullpen, it looks okay. But they have to score runs. That's the big question, and that's what we are all waiting to see whether they can do that."

"Right now they are going through all of the fundamentals that every team is doing down in Spring Training. It's hard to get a feel for what we are going to see when they actually start swinging the bats for real and playing some games down here.

The attitude seems good. Ryan Howard obviously is one of the big questions in camp. We're all keeping an eye on him. He's moving well, which is a good sign. Certainly better than he did a year ago.

Until they're up against some live pitching, [using] their new small-ball approach that they've been talking about, it's really hard to tell."

97.5: "Give me somebody on the offensive side that might sneak up and have a pretty good season this year."

"I think Ryan is the one guy you certainty hope can do that because he's right up there in the middle of the lineup, and will probably be your "four hitter". You need him to do that.

Another guy is Dom Brown. We saw a slash of it, a month period where Dom Brown was the player everyone thought he can be. He certainly had a down year a year ago. So, if he can have a bounce-back year, in the middle of that lineup, that certainly would be good too.

I like Cody Asche. He's a guy that puts the work in and is really, really focused on having himself a good season. He had a decent season a year ago. Again, if he can step it up, and play a little bit better and come up in clutch situations, that would be good as well."

97.5: "Last year, there was a little bit of a negative thing going on in Spring Training. How about this year? Is this year really a fresh start? Are guys smiling, bouncing-around out there?"

"They really are. The attitude has been talked about a lot. ... I think there's something to that. When you're losing, and losing a lot, you're going to have tougher times in that clubhouse. That's what we saw a year ago. Whether or not, if they start losing this year, that it returns, that remains to be seen.

I know Ryno has talked about giving them the room and saying, 'you know, this is your team. Take it where you want it to go.' Guys like Dom Brown, Cody Asche, and Freddy Galvis are I believe are talking that to heart. Hopefully it pays off. Hopefully you have a little bit more harmony in that clubhouse and hopefully they take that out on the field and it turns into some wins."

97.5: "Putting the 76ers to the side, and maybe if the Eagles don't land Mariota in this upcoming draft, I think one of the brightest spots we have in this city, right now, is Ken Giles. Tell us what you think will come about him this year. Do we have to worry about the 'sophomore slump?' Will he be the next close to take over for [Jonathan] Papelbon, whether he gets traded or finishes out his career with the Phillies in these next couple of years. Is Ken Giles this close coming up?"

"I think there's no doubt about that. He is exciting to watch. He is a guy, you look at him and don't see any kind of holes in his game. He has a strong, metal side of things, which you need in the back-end of the bullpen. We all know he can throw gas, and he's fearless when he's out there on the mound. I think he's going to be a pretty special player for years to come.

Murphy on how things have been so far being a Phillies broadcaster:

"I tell people all the time. I truly believe I have the best job in the world. I really, really do believe that. I've been a Phillies fan since I was six years old ... grew up listening to Harry and Whitey, and Andy and those guys, and now to be a part of that, really is kind of remarkable. I stop and pinch myself all the time.

The season is long, but I'm a huge baseball fan. I'm coming off of five months of being home with the kids and enjoying that. Now's the time to get back to work. They understand that. Can it be difficult sometimes? Sure it can. It's basically the life of a ballplayer without the money. But, that said, I wouldn't trade it for anything because it really is a lot of fun."

"Tomorrow [Sunday], the Phils have a scrimmage game against Tampa. Ben Davis and I will be calling that game, not for broadcast, but just to get a little work in. I'm going to do play-by-play, he's going to do color.

Starting on Tuesday, the full guys. Tom McCarthy, Matt Stairs and Ben [Davis] in the booth, along with myself, will be the first game down here in Clearwater at Bright House Field.

We will broadcast on Comcast SportsNet, or the Comcast Network, all 16 home games from Bright House Field. Basically, every other day starting on Tuesday, you will be able to see some baseball."