Jonathan Papelbon on the Blue Jays: “Yes, Toronto interests me” 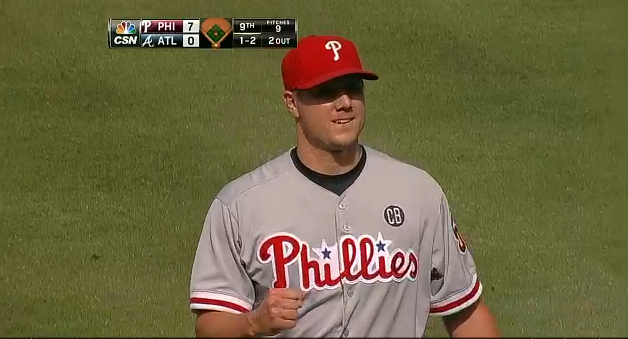 The Phillies lost a potential destination for closer Jonathan Papelbon today when the Milwaukee Brewers agreed to terms with Francisco Rodriguez.  In the past, the Toronto Blue Jays and Brewers were the two teams most-closely linked to Papelbon.  With the Brewers no longer in the mix, what about the Blue Jays?

Papelbon admitted that the possibility of pitching for Toronto interests him even more than pitching for Milwaukee would have.

“Yes, Toronto, interests me — if it interests Ruben,” he said. “I know some of the guys on their coaching staff. They’re a good team. If Ruben can do a deal with them, I’d be interested.”

Papelbon is making $13 million this season and has a vesting option for $13 million for 2016. The option kicks in if he finishes 48 games this season. Would he require that option to be guaranteed to accept a deal to Toronto?

But Papelbon said he would love to make the playoffs in 2015 with the Phillies:

“My storybook ending here is sneaking into the wild card and getting hot in the playoffs with these Phillies.”

The Phillies would have to surprise a lot of people for that to happen.

But before you get too excited, Jon Heyman of CBS Sports seemed to throw water on this hot stove, even before it got hot:

With k-rod going to brewers, philly's options for papelbon are at very least well hidden. Jays not really interested.


That leaves the market with one free agent closer remaining in Rafael Soriano, and the Blue Jays are the only one with a direct need left.

The Phillies may have to simply sit back and wait to see if another team's closer implodes or gets injured.  Perhaps a repeat of Joe Nathan's 2014 would cause the Tigers to finally make an additional move to improve the team.  If the Dodgers find that Kenley Jansen will not recover as fast as they currently think, they'll be more likely to make a move.   Finally, if Papelbon himself falters or gets injured, 2014 will be it for Papelbon, the Phillies, and his contract.