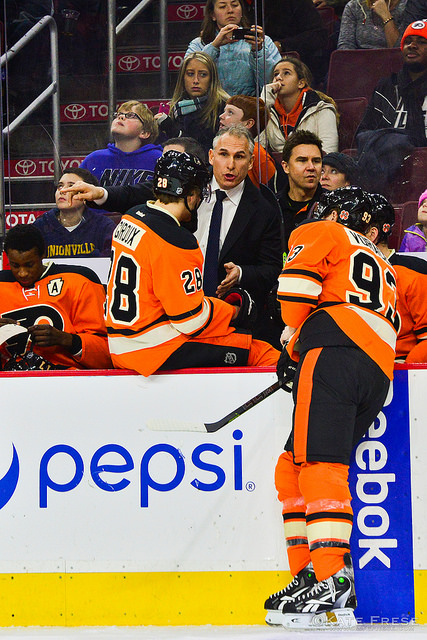 Hextall said he made the decision on Thursday night and told Berube on Friday morning.

"Nothing changed," Hextall said. "I wanted to make the right decision. I put all the facts together, but in the end, you go with your gut.

Berube was 75-58-28 as head coach of the Flyers. He took over the head-coaching job upon the firing of Peter Laviolette three games into the 2013-14 season. A difficult start to Berube’s coaching career was still turned into a playoff appearance in the 2013-14 season and a seven-game series with the New York Rangers.

Berube, 49, was an assistant coach for the Flyers starting in the 2007-08 season. He had also been coaching in the Flyers organization since 2004.

Berube also played for the Flyers for seven of his 17 seasons in the NHL.

Assistant coaches Ian Laperriere, Joe Mullen and Gord Murphy remain for now, but Hextall said that the rest of the coaching staff would be addressed upon the hiring of a new head coach.

Goaltending coach Jeff Reese left the team in March. A search for his replacement, as well as the other assistant coaches, will continue during the offseason.

Hextall said he would like to have a new coach in place by the NHL Draft, which starts on Friday, June 26.

The Flyers coaching search begins immediately as several coaching options will become available. The most highly touted free agent in the coaching market could be Mike Babcock if he does indeed leave the Detroit Red Wings after this season. The Red Wings are currently facing the Tampa Bay Lightning in the first round of the playoffs.

The next coach of the Flyers will be their third since the start of the 2013-14 season and fifth since the cancelled 2004-05 season due to the lockout.