Sizing Up Sandberg: Manager Ryne Sandberg is getting little out of his players 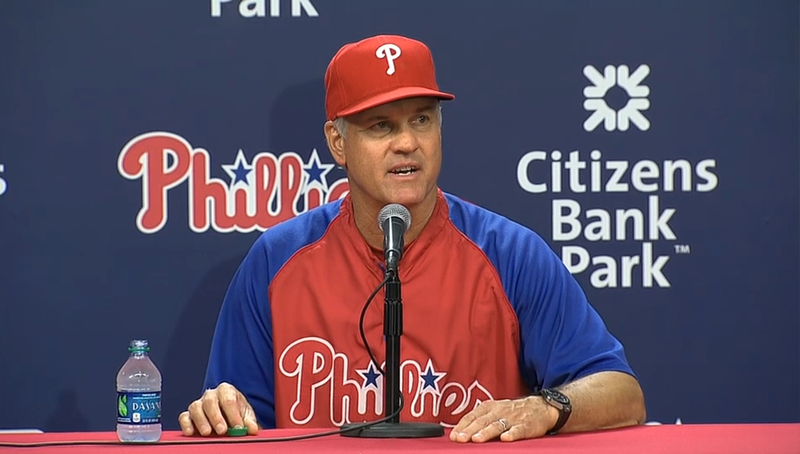 Full disclosure: I am a Charlie Manuel guy. He wrote the foreword for my book, but he also helmed the only championship team I ever saw for Philadelphia (apologies, '08 Philly Soul). While his maneuvers on the field were, at times, befuddling, his leadership qualities and locker room presence were both legendary.

Cole Hamels once remarked that Manuel was a "father figure" to him and other players, and that's exactly what that team needed. Manuel was the manager the 2008 team needed and deserved, nurturing his premiere veteran talent and, really, just staying out of the way. After all, baseball is much more one-on-one instinctual response than X's and O's. Like any good father, he always seemed to know best despite some disagreeable decisions. One could argue the moves he made, but back-to-back World Series appearances have surely made Manuel one proud papa.

Ok, fine. I'm laying it on pretty thick. But the meats and cheeses part feels accurate. It's not than I miss him, per se, but I miss championship Phillies baseball.

The product on the field is disastrous right now, and if I am to give credit to Manuel for heading all those great playoff teams of the last decade, I need to come down hard on Ryne Sandberg for captaining this steaming pile of Schmitters.

Currently, the Phillies are 10th (of 15) in the league in ERA (4.03) 13th in fielding percentage (.976) and dead last in batting average (.223). Meanwhile, just for fun, Cole Hamels' batting average in 2008 was .224. So, the Phils are failing pretty spectacularly in every facet of the game. You can blame the pitchers for poor outings, the hitters for bad performances at the plate and in the field, or you can blame the manager for everything.

Of course, GM Ruben Amaro is the architect of this stinker, but it's alarming how little Sandberg is getting out of his players. Six players on the active roster are currently batting below .200, among them, two of the greatest Phillies ever at their respective positions in Ryan Howard and Chase Utley.

On the mound thus far, the Phils are actually performing very well. That's at least one feather in Sandberg's cap. The top three starters-- Hamels, Aaron Harang, and Jerome Williams-- have a combined 3.10 ERA, while the team's top three relievers-- Jonathan Papelbon, Ken Giles, and Jeanmar Gomez-- have just a 1.32 ERA between them. Knowing when to pull a pitcher and who to bring in is the most crucial decision a manager can make.

If you've got Roy Halladay, Cole Hamels, and Cliff Lee all in their prime, these decisions might be made a tad easier. Sandberg doesn't have that luxury, so it's easy to second guess his calls to the bullpen. But the numbers are on his side here as well. The Phillies have the second-best aLI (Average Leverage Index) in the NL at .893. This figure measures the approximated pressure faced by the relief staff, and any number below 1.000 is considered above average.

So, Sandberg seems to be putting his guys in a good position to perform well. This doesn't totally factor in whether he's pulling the plug too early or too late on his starters, or if he's bringing the right relief pitchers into the game for each situation. There are no stats for that.

Ultimately, this team needs to score more runs. That is the primary problem. Blame Sandberg, blame Amaro, whatever. In reality, Charlie Manuel would not be able to salvage this mess. This is not a winning baseball team. But is Sandberg doing everything he can to get the most out of his players? Does he have that fatherly intangible that was so apparent in his predecessor's repertoire?

That is what I'll try to examine every in week in Sizing up Sandberg. If he makes it to next week...