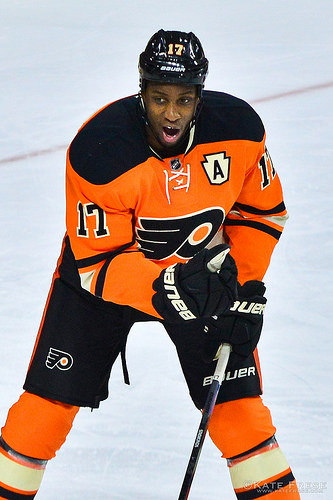 After getting off to a solid start through their first seven games (4-2-1), the Philadelphia Flyers have played a miserable stretch of hockey that has seen the club drop seven of their last eight games (1-5-2). Taking the good with the bad, here are five early-season trends to keep an eye on in the weeks to come.

In each of the last two seasons, the Flyers' met a fork in the road immediately after their 15th game of the season. Two years ago, the club was mired in an even worse scoring drought than they have been so far this year and had a considerable worse record as well. Last season, the club was not in bad shape after 15 games and was scoring at a healthy clip (largely due to the dominant play of its  first line and top power play unit).

From that onward, however, the fortunes changed dramatically. In 2013-14, the club started to click offensively in its 16th game, built on it in subsequent games and went on to become a playoff team that ranked near the top of the league in scoring during the regular season. Last season was the diametric opposite. The team began a month-long struggle that left the Flyers buried in the standings. Meanwhile, although the top line and top power play unit continued to soar through mid-season,  everyone found goals much harder to come by as the season progressed.

Following is a breakdown of where the Flyers were in terms of record and goals scored  through 15 games in each of the last three seasons, as well as the individual scoring numbers of the team's three most important offensive forwards — Claude Giroux, Jakub Voracek and Wayne Simmonds — through 15 games and at the end of the year.

Offensively speaking, the Flyers' start this season is eerily similar to the issues they had scoring goals over the same span two seasons ago. Can Giroux, Voracek and Simmonds end up finishing with similar end-of-season totals to either of the past two seasons? It is possible.

However, keep in mind that the Flyers' ability to move the puck up the ice from the defense to the forwards may not be equal to where it was even two seasons ago. Kimmo Timonen is gone and it remains to be seen if Braydon Coburn was adequately replaced by the addition of Evgeny Medvedev — it seemed that way in the preseason but the early-going of the 2015-16 regular season has been a bumpy road and is still too small of a sample size on which to judge. That is especially true in light of Medvedev's recent five-game absence due primarily to a concussion.

Activating defensemen in the offensive zone

Heading into the regular season, one of new head coach Dave Hakstol's stated objectives was to get more motion in the offensive zone, with the defensemen pinching when the opportunity presents itself. Thus far, the team has had problems putting that into action.

Michael Del Zotto, who has no goals and just one assist to show for the first 15 games, has taken on greater defensive responsibilites — with decidedly mixed results — than he had the past. However, he remains one of the players whom the Flyers are counting upon to generate some offense from the back end as well as taking care of his own end of the ice. Last season, Del Zotto chipped in 10 goals and 32 points in 62 games.

Many of Del Zotto's goals and assists last season came when he joined the rush up the left wing and shot from the left circle, or pinched up to the area with the Flyers in possession of the puck and the opposing defense's attention diverted. Del Zotto said that it's not that he is not looking for such opportunities, it's that the chances just haven't been there.

"You don't want to force the play," said Del Zotto. "We can get better in a lot of areas. We can't really get motion in the offensive zone when we haven't had as much possession there as we should. We're not executing like we can. Like we've had a lot of rushes that have been one and done."

Between Del Zotto, Mark Streit (who typically does most of his offensive damage on the power play and is currently second on the team with eight points, including three goals) and Medvedev (zero goals, one assist in 10 games), the Flyers at least have three defensemen capable of contributing offensively when  the chance arises. Getting these players opportunities to be more involved would go a long way toward picking up the pace.

Goaltending is the least of the Flyers' concerns this season. Although Steve Mason can play better than he has in the early going of this campaign — especially in light of extenuating circumstanes of an emotionally wrenching family situation and a recent bout with food poisoning or the flu during the team's western Canada trip — his season save percentage excluding the disastrous second game of the season is a reasonable .917. Michal Neuvirth, meanwhile, has been spectacular for the most part.

Every team in the NHL keeps a scouting report on the goaltenders they face. When the Flyers lost in overtime to the Buffalo Sabres on Oct. 27  after an OT breakaway goal by Zemgus Girgensons, the Sabres' player revealed in the post-game locker room that he went in with a specific plan of attack on Mason based on the pre-scout meeting the team had when preparing for the Flyers.

"We had a lot of video on his five hole so I thought that was my biggest chance to get it in there, so I did that," Girgensons said.

Last season, after the month of October, Mason allowed relatively few goals to slip through the five-hole. His main weakness was high to the blocker side. In the early going of this season, he's given up his share of goals between the pads as well as short-side goals. In weeks to come, it will be interesting to see what adjustments he makes to get back to the form he had last year.

In Neuvirth's case, the Czech netminder has shown very few holes. However, at the 57-second mark of the first period of the team's game against Colorado, Jarome Iginla's slow-motion knuckleball of a partially flubbed shot from a severe right side angle somehow rolled up Neuvirths skate and found a coin-slot opening inside the short side post with Neuvirth in a reverse VH position.

The Iginla goal was a sheer fluke. However, after one went in, the Avs tried similar shots several more times during Tuesday's game. None went for goals but two were rather adventurous. In upcoming Neuvirth starts, watch to see if other teams try to go low to the short side.

The reverse VH (RVH) has become a big trend among many NHL goalies in recent years, because goaltenders such as Jonathan Quick have had a lot of success with it. In a nutshell, the RVH inverts the traditional positioning of the goalie's pads — leg against the post kept vertically, the other pad horizontal.  The popularity of the  RVH has grown to the point that it is now perhaps getting overused to some extent.

"You've got to take the good with the bad with RVH," said goaltender-turned-TV analyst Brian Boucher. "Tons of goals go in the league because you just can't cover everything."

While the Iginla goal was more about bad luck than bad save-attempt selection, it should also be noted that, if Neuvirth's pad leg had been horizontal and flush to the post, the play would have been an easy save. The agile Neuvirth usually makes RVH work for him when he employs it but he got burned on it and the opponent deliberately went for the same spot several more times.

Above all, hockey is a game of adjustments and counter-adjustments. The Flyers goalies study film on the shooters the same as the shooters study them.