In a game they needed to win, penalty box woes get Flyers again 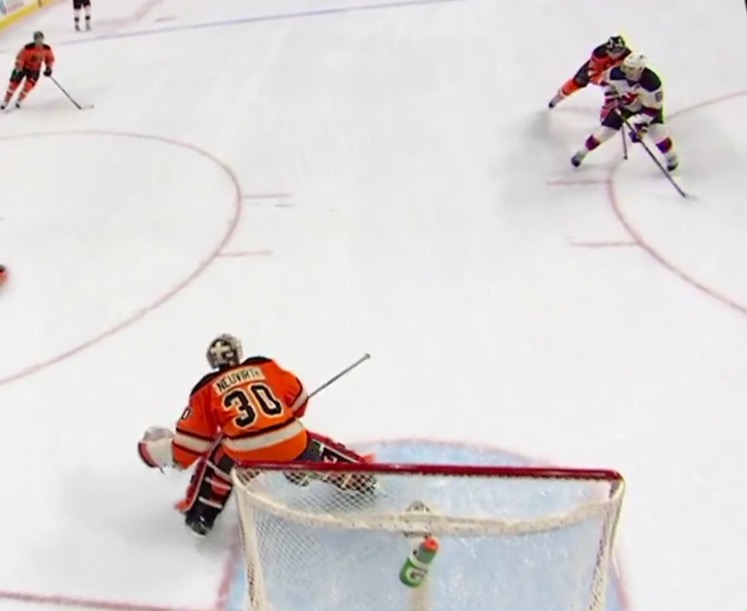 Jake Voracek ever so slightly got his stick into the midsection of Andy Greene on a two-on-one in overtime. After nearly 15 minutes without a penalty call — other than concurrent roughing minors on Radko Gudas and Bobby Farnham — T.J. Luxmore's arm went up with a call.

Adam Henrique scored to win the game for the Devils just 27 seconds later.

In a game where the Flyers needed two points and really couldn't afford to let the Devils have even one point, the Flyers did an admirable job rebounding from a rough start. Unfortunately, it forced their playoff hopes to take an even greater hit as time continues to run out.

"It was very important for us to win," Shayne Gostisbehere said. "We have two games in hand and they’re the team ahead of us in the standings by four points. We definitely needed the two points out of it. At least we got one, but obviously this was a big two points we needed.

"I think in the third period we played good enough to win the game, but wasn't the case," Claude Giroux said. "For the first period they out worked us, but we kind of got our [expletive] together and started playing better. It’s got to be a full 60 minutes."

To add injury to insult, the Flyers are now five points back in the wildcard race and will not play the next several "weeks" without Michael Del Zotto, who is out indefinitely with an upper-body injury according to GM Ron Hextall.

Del Zotto was playing on the Flyers top defensive pair with Gostisbehere and had evolved into one of the Flyers better defensive players this season.

With both Del Zotto and Sean Couturier on the shelf for the next few weeks at least, the Flyers are going to have to dig deep to make any sort of run.

"He’s taken on a real two-way role for us," head coach Dave Hakstol said. "He’s been a good penalty killer, he gets a chunk of every PK, with that development we get right back at it tomorrow. Certainly as you go into tomorrow and even in the first couple of games if you’re going to replace 21, 22, 23 minutes, most likely it will be a little bit by committee."

Again, given the amount of time left, the Flyers are teetering on the border between a Top-5 draft pick and a playoff spot. It is almost a purgatory of sorts. The good news for the Flyers is that several years of building and drafting prospects have the Flyers in position to make that leap in the coming years.

But for this season, the Flyers just can't seem to produce the big goal, can't seem to avoid taking the unnecessary penalty or getting hit with the ticky-tack call that will ultimately sink them.

In this case, the Flyers may have lost the game with two separate penalties. After playing almost the entire third period without a penalty, the call on Voracek is rare. If it is not a truly obvious infraction, it traditionally goes uncalled in the extra session. Instead, Voracek was in the box as the Devils struck to grab the second point after being outplayed for much of the second and third periods.

The other call that really hurt the Flyers chances came early in the third. After the Flyers were given a golden opportunity with a four-minute power play after a high-sticking double-minor was called on Sergei Kalinin, Wayne Simmonds took an unnecessary interference penalty just 35 seconds later. The Flyers eventually tied the game on the latter half of the power play, with Gostisbehere's record-setting goal, once the two minutes of 4-on-4 play were over, but it erased two minutes of power play time for the Flyers that may have produced a second goal.

The Devils also scored on both of their power-play attempts, as the penalty kill continues to be the Achilles' heel of the Flyers.

"The way we want to look at is we have to make sure we don’t go in the box," Giroux said. "We’ll get our power plays, we’ll get our chances so we need to stay out of the box. It’s gonna happen sometimes. Sometimes you work too hard or try too hard, and you get a penalty. When that happens we just have to find a way to kill it."

A five-game road trip begins on Sunday and it begins with the Flyers being a shorthanded team with dwindling playoff hopes. By the end of this road trip, the Flyers may very well be out of the race. Or they could be in the thick of it still.

But as it has far too many times already this season, those hopes took another hit. After too many blows, eventually you just can't get up any longer. The Flyers will try, but the odds are certainly stacked against them now.

"It wasn't crushing," Simmonds said. "We have a lot more games in the season. First period wasn’t ideal. I thought it was really tight actually. It was a tight game, I thought we played well. Played great the second and third. Overtime, we got a penalty unfortunately.

"I don’t think it matters where we’re playing. We got to get points. That’s the bottom line. We have to keep playing good hockey. We got to play great lines one through four. We got to get these points."

"Go and play well, nothing more, nothing less," Hakstol said. "We’ll turn the page. It’s a tough way to lose a point today that’s what it feels like, but you turn the page. I said it a few days ago you have to have a pretty short memory. So we’ll do that, turn the page, and get ourselves mentally focused on the two points that are available tomorrow night."