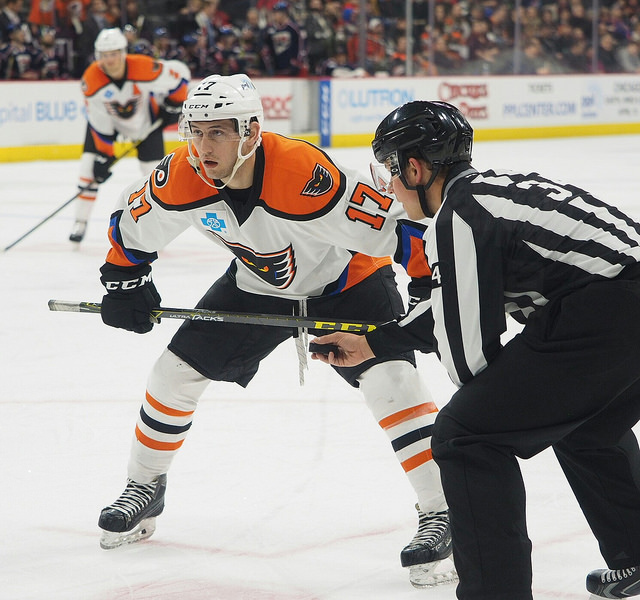 Over the past several games, the Lehigh Valley Phantoms have shown an uncanny ability to score goals in the third period, particularly when the game was on the line.

They padded that total of late with two more goals in the third period on Sunday night, which was enough to complete another comeback against the Hartford Wolf Pack and the Phantoms took home a 2-1 win at XL Center in Hartford.

An evenly-played first period resulted in three power plays for Hartford but no luck against Anthony Stolarz, who stopped all eight shots from the Wolf Pack. Hartford led in shots through 20 minutes, 8-6.

The Phantoms displayed a much better showing in the second, leading in shots for the period, 10-9, but a late bench minor on Lehigh Valley set up the first goal of the game.

The Phantoms killed off the penalty but allowed a 3-on-2 just seconds later, and Jayson Megna finished it off with his 11th goal of the season at 19:18 of the second.

That forced the Phantoms to search for yet another third-period comeback. At just 2:02 of the third, they had tied the game.

Chris Conner attempted to cut in front and as he did, slid the puck to Phil DeSimone. DeSimone managed to connected on a blind pass in front to Taylor Leier in the slot for the goal. It was Leier's 18th of the season.

At 8:52, the Phantoms took advantage of a mistake and capitalized for the lead. Magnus Hellberg had trouble with the puck as Aaron Palushaj beat out an icing call and stripped the Hartford netminder of the puck. He centered to Kevin Goumas facing an open net and he buried it to give the Phantoms the lead. It was Goumas' fifth goal of the season. The secondary assist went to Jay Rosehill.

Stolarz stood tall in the final minutes, including on a key pad save with just over a minute to play, as he stopped 24 shots to earn the win.

Notes: Both teams went 0-for-3 on the power play. The Phantoms have points in four of their last five games, including two of the three games this weekend, both against Hartford. With his assist on the Leier goal, Chris Conner extended his points streak to nine games.

Up Next: The Phantoms remain on the road as they take on the Syracuse Crunch on Wednesday night at 7 p.m.