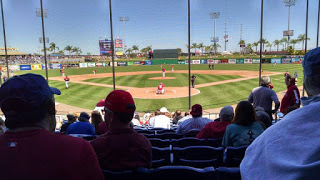 The Phillies have kept busy in the past few days. Gone to the minors are Adam Morgan, Luis Garcia, Elvis Araujo, David Lough, and Ryan Jackson. Out of the organization is Edward Mujica. What's the roster look like now?

All of this leaves one small problem- 41 players would have to be on the 40 man roster to make this team look this way. Could the Phillies send Stumpf back? Sure. Given their desire to stockpile younger arms though, that doesn't make the most sense at this stage. One would expect they will try and get through the season with him. Expect that Buchanan, Gonzalez, Featherston, Mariot, and Garcia all are the players on the hot-seat, assuming the Phillies don't trade someone out to a team in need. If the Phillies 60-Day DL Harrison, Altherr, and Hollands, they will only need to Designate For Assignment one more player to keep to 40 players. It's also worth noting that Bailey (May 1st), Russell (June 1st), and Frieri (Thursday) all have opt outs in their contract, and that Burriss would be the likely odd man out when Asche returns, and he does not have option at this time, meaning a 40 man spot could come open by May.
Topics
Uncategorized