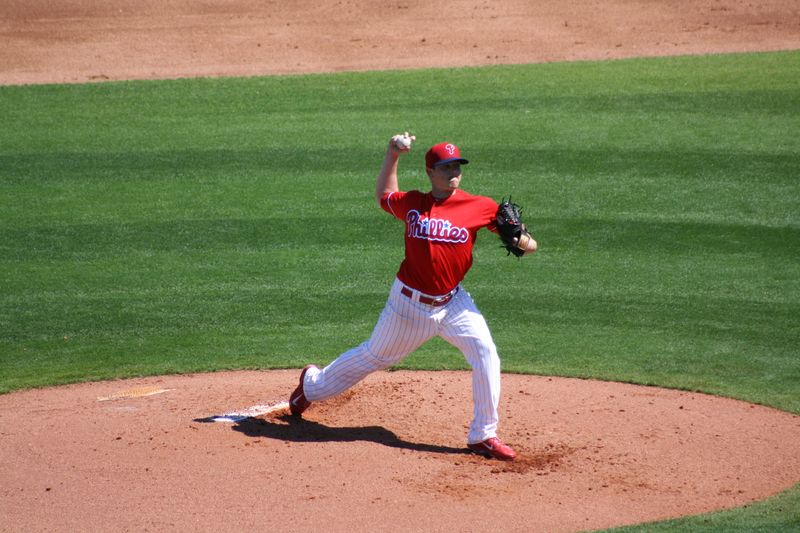 Jeremy Hellickson allowed one run and struck out five in two innings of work on Friday afternoon. Photo: Frank Klose/Philliedelphia

The Phillies brought the bats in the early going. A seven-run second inning had them rolling to a win.

Then the eighth inning hit and the wheels fell off. Luis Garcia, Hector Neris and Edubray Ramos all struggled in getting the final six outs, allowing eight runs to the Braves to erase a 9-2 lead the Phillies had after the fourth and give the Braves the lead.

But with two out and nobody on, singles by J.P. Crawford and Brock Stassi brought the winning run to the plate in Cedric Hunter, who crushed a three-run walk-off home run to right to give the Phillies a 12-11 win over the Braves on Friday afternoon.

The Braves opened the scoring in the first off Jeremy Hellickson. Back-to-back doubles by Ender Inciarte and Erick Aybar plated a run before Hellickson recorded an out.

The Phillies answered in a big way in the second. With one on and two outs, the Phillies strung together six straight at-bats ending in either a walk or a hit.

It started with an RBI single to right field by Darnell Sweeney. After a walk to Ryan Jackson, Cameron Rupp singled up the middle to score another run. Tyler Goeddel followed with a two-run double to right. After another walk to David Lough, Maikel Franco belted a three-run home run to left to cap the seven-run inning.

The Braves got back on the board on an RBI groundout by Jace Peterson in the fourth, but the Phillies answered with back-to-back RBI singles by Lough and Franco in the bottom of the fourth.

The Braves added one more run in the fifth, with a run scoring when Nick Swisher grounded into a double play.

In the eighth, the wheels came off when another run scored for the Braves after a throwing error by Sweeney while attempting to turn an inning-ending double play.

That error allowed the Braves to get two more hitters to the plate in the eighth. A walk then a two-run single by Matt Kennelly cut the Phillies lead to three. A bases-loaded walk to Mallex Smith by Garcia, who allowed all four runs in the eighth, cut the lead to two.

Neris walked two and allowed a hit to load the bases with one out and with two outs allowed a bases-loaded walk to Kennelly to make it a one-run game. Neris was pulled with two outs for Edubray Ramos to try to get the final out. Ramos walked Ozzie Albies on four pitches, allowing the tying run to score.

Ramos got a ground ball from Mallex Smith that should have ended the inning, but another throwing error from Sweeney allowed two more runs to score, giving the Braves the lead.

Now trailing by two, the Phillies were down to their final out when Crawford and Stassi brought the winning run to the plate with back-to-back singles. That's when Cedric Hunter connected for a three-run, walk-off home run to give the Phillies the win.

Hellickson picked up five strikeouts in two innings of work, allowing just the back-to-back doubles to open the game.

The Phillies also got scoreless outings from Andrew Bailey and Chris Leroux on the mound.