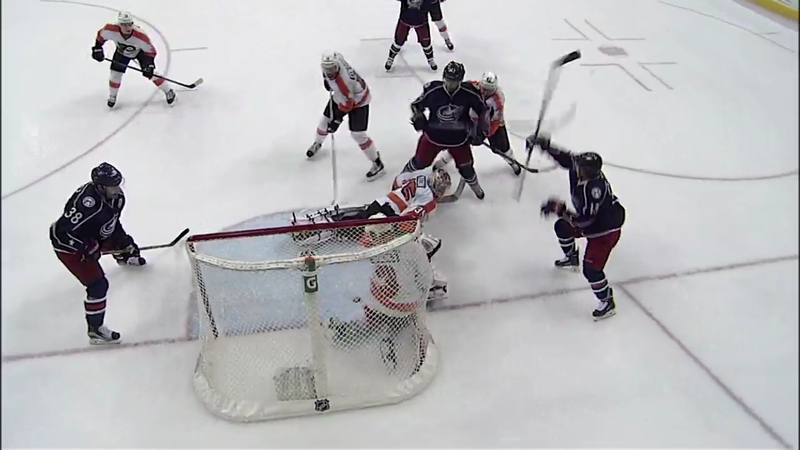 One minute, four seconds. It's a long time in any sport. The Flyers learned just how long on Tuesday night.

Leading 2-0 with under two minutes to play and a power play, the Flyers looked like they were smooth sailing to a victory. The Columbus Blue Jackets, a thorn in the Flyers side in recent years, had other ideas.

A goal with 1:04 remaining cut the lead to one and another with 8.9 seconds remaining forced overtime. The Flyers couldn't overcome the late rally, failed to score in overtime, and fell in the shootout for a 3-2 loss at Nationwide Arena on Tuesday night.

The Flyers relied heavily on Steve Mason for the second straight night, as the Blue Jackets opened up a 9-2 edge in shots in the first 10 minutes.

But off a giveaway by Columbus, it was the Flyers who were able to strike first.

Nick Schultz threw a shot into the slot and Brayden Schenn managed to work around a defender and poke the puck to Claude Giroux. The Flyers captain lifted a shot up and over Sergei Bobrovsky for his 20th goal of the season at 11:42.

In the final eight minutes of the period, the Flyers had to kill off two penalties and dodge a few bullets in the defensive zone. Through 20 minutes, the Blue Jackets held a 15-8 shot advantage.

The second period was the Steve Mason show. The Flyers netminder made 16 saves in the second, including a spectacular stop on a rebound from Michael Chaput, to keep the Flyers in front through two.

The period was also marred by a high hit to Pierre-Edouard Bellemare. Jared Boll laid a vicious hit on Bellemare with the puck nowhere in sight and knocking Bellemare into a daze. Boll was assessed a five-minute major for interference and a game misconduct. The Flyers failed to score on the three-minute power play that followed — Ryan White was also given a roughing minor out of the ensuing scrum.

As the third progressed, the Flyers were clinging to a one-goal lead with Mason leading the way once more. Midway through the period, with offense clearly at a premium, the Flyers were given a huge opportunity with a power play.

They did not waste it.

In the midst of a line change, a puck sat in the slot as a fight for possession broke out. It was Ryan White finding the puck and putting it home to give the Flyers a two-goal lead. It was White's 10th goal of the season.

But Columbus struck for a late goal with the goalie pulled, while on the power play, to cut the lead to one as a long shot by Seth Jones was deflected in by Boone Jenner with 1:04 to play.

Back at even strength and with Bobrovsky pulled again, the Blue Jackets pressed and managed the tying goal as Cam Atkinson grabbed a rebound with 8.9 seconds remaining to even things up and force overtime.

Both teams had power play chances in the overtime but failed to score as the goaltending prevailed. That sent things to a shootout.

The shootout went five rounds before a goal, when Jenner fooled Mason with a deke and scored. Sean Couturier was the Flyers last hope at that point and was stopped to give Columbus the unlikely victory.

Mason made 51 saves in regulation and overtime and added another three in the shootout for a total of 54.

The Flyers did gain a point in the standings and by doing so moved into the final playoff spot with Detroit's loss in Tampa.

The Flyers return to action on Thursday night when they face the Colorado Avalanche. Game time is 9 p.m.