Hextall gets it right again with proper handling of deadline 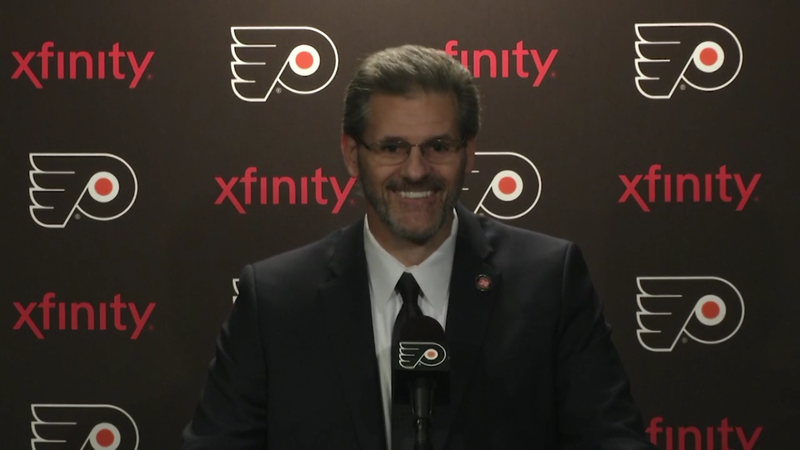 Monday was a tense day for the Flyers. When you're a team hovering the line between playoff contention and playing the role of seller again, any amount of players can be up for grabs.

The Flyers had their share of candidates, but ultimately decided to hold onto everyone and were quiet at the deadline.

GM Ron Hextall has been about action in the past and he's been praised for it. He has been about making the bold move, the unexpected move — waving a magic wand to make something out of essentially nothing.

This time, the GM that has done everything right by being active did the right thing again, this time by doing nothing.

"We're looking if we can make ourselves better today and not hurt our future, we're all for it," Hextall said. "Nothing came up that made sense."

Hextall deserves credit again. In a year where the Flyers could have looked at a deficit in the standings as a reason to sell. They didn't.

At the same time, Hextall made no rash moves. Sometimes doing nothing is doing something.

If nothing else, credit Hextall for simply staying the course. With a team in position to make a playoff run, he didn't rob them of that chance and he didn't do anything to mortgage the future just to get a playoff series out of the team.

"We have a vision set out a couple years ago and we're not deviating from it," Hextall said. "If we wanted to start unloading picks and prospects, we could have become a better team. We weren't going to do that. Conversely, we're three points out. You owe your players, you owe the organization, you owe the fans a certain amount."

What made the deadline interesting was the overall lack of deadline day moves. There were ultimately 19 trades made on Monday, but many of them coming in after the deadline had passed. As 3 p.m. hit, only five deals had been completed.

"It's competitive. There's not a lot of teams that are out of it. A lot of teams at the top are capped out," Hextall said. "It's a different market. The market starts strong and ends a little bit weaker. It's a very unpredictable time during the year."

Hextall said that, as the case was with the Flyers, some talks that don't get done at the deadline can always be revisited. The Draft will serve as another deadline of sorts as teams pick up activity again.

"That happens all the time. There's always seeds whenever you talk to GMs, you find out their needs, they find out your needs and wishes," Hextall said. "Sometimes things end up working out down the road."

So what makes Hextall right when so many people believed selling was the only option? There are certainly a couple of reasons.

Hextall's stance likely changes if the Flyers don't win the first two games of the current homestand — which they extended to three on Monday night. There would have been a large difference between three and five points out and knowing the road that lay ahead if the margin were indeed greater and the odds longer for the Flyers to make the playoffs.

As Hextall said, the Flyers have that margin at three. You owe them the chance to make the playoffs. You owe the fans a chance at a small taste of success.

Success like that would be welcome to Flyers fans, particularly because everyone knows what's coming soon. If this team can make the playoffs, and prospects that could totally change the game are coming, it sends the imagination soaring.

At last year's deadline too, he sold higher, got key draft picks for Kimmo Timonen and Braydon Coburn and helped turn those two picks into Travis Konecny.

With a prospect group that many teams can only dream of, Hextall stood pat because it was exactly what the situation called for. He is giving this team every chance to make the playoffs by putting the ball in their court. He is also well stocked in prospects, providing a bright future for the Flyers with what is to come.