Eagles Flyers Phillies Sixers About Us Write For Us
NHL Scout on Team with Best Draft: 'Hands down, Philadelphia'
Eagles 53-man Roster Projection 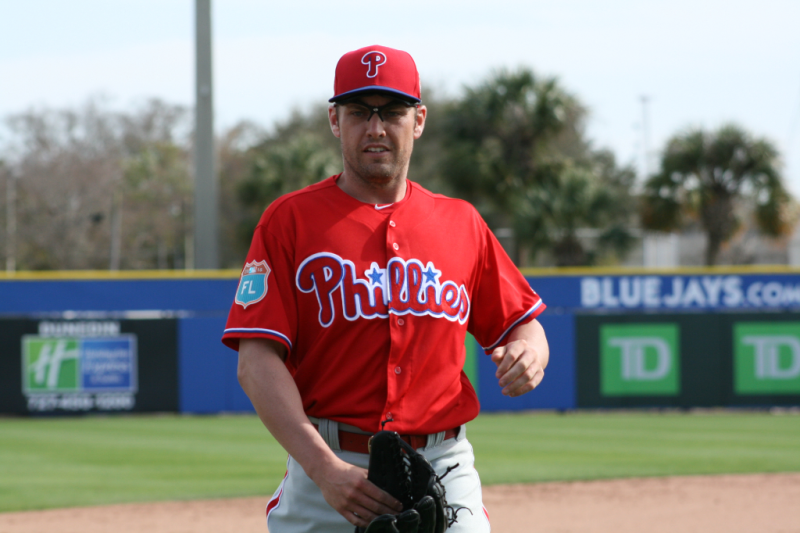 PHILADELPHIA — With the 2016 regular season nearly halfway complete — 10 games ahead of concluding the unofficial first half with All-Star festivities scheduled to take place in San Diego, California starting Sunday, July 10 — the Philadelphia Phillies (35-45, .438) sit 12.5 games behind the Washington Nationals for first place in the National League East division.

They trail the Miami Marlins by seven games for the second Wild Card spot.

It's an improvement from one year ago. Eighty games into the 2015 campaign, the Phillies had eight fewer wins with a MLB-worst record of 27-53 (.338), 17 games behind the Nationals in the division and 16 games behind the Chicago Cubs in the Wild Card.

Leading up to the 87th Major League Baseball All-Star Game will be a six-game homestand against the defending World Series champions Kansas City Royals and the division-rival Atlanta Braves, followed by a four-game brief road trip against the Colorado Rockies at Coors Field. No Phillies currently are among the top of ballots to be elected onto the National League All-Star roster, however it likely that center fielder Odubel Herrera and closer Jeanmar Gomez will receive strong consideration from managers and coaches as reserves. Per rule, each team has to have at least one representative on the All-Star roster.

And while it may be too little too late, one player Phillies manager Pete Mackanin believes is putting up All-Star caliber production as of late is outfielder Peter Bourjos, who was claimed off waivers this offseason from the St. Louis Cardinals and later avoided arbitration by agreeing to a one-year, $2 million contract.

"Bourjos was probably the MVP of our trip," Mackanin said. "The guy just turned it on and started playing like an All-Star."

During the Phillies' nine-game road trip against the Minnesota Twins, San Francisco Giants and Arizona Diamondbacks from June 21-29 — in which they finished 5-4 by outscoring their opponents 57 to 49 — Bourjos batted .472/.525/.722 with eight runs scored, a double and triple each, four walks, two home runs and six RBIs.

With the game tied at 8 in extra-innings during Wednesday's series finale, Bourjos reached first on an infield single and went on to score the game-winning run on a sacrifice fly to right field by Tyler Goeddel. Earlier in the game, the Park Ridge, Illinois, native opened up scoring with a two-run home run, his third of the season.

"I think I was trying to do too much," Bourjos told MLB.com. "I'm starting to realize that you don't have to swing hard to hit the ball hard."

The Phillies have off on Thursday. They will resume action Friday evening at Citizens Bank Park as right-handers Jeremy Hellickson and Ian Kennedy square-off in the series opener against the Royals.

Odubel is an afterthought.
heath.auxt@aholdusa.com